The treatment of Om was conducted over a period of three months. He and his father Santosh were diagnosed with the contagious disease in July, with mild symptoms. They recovered within a month, but Om experienced severe pain in his abdominal region. It was subsequently revealed that a portion of his small intestine was left damaged by the virus. 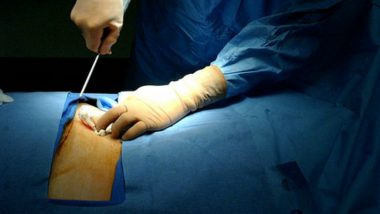 Mumbai, November 23: The first-ever intestine transplant on a COVID-19 patient in India was performed at Pune's Jupiter Hospital. The crucial life-saving operation was necessitated to save the life of 10-year-old Om Ghule, a resident of Mahad town in Maharashtra. The minor had suffered from a rare post-coronavirus complication that left his intestine damaged.

The treatment of Om was conducted over a period of three months. He and his father Santosh were diagnosed with the contagious disease in July, with mild symptoms. They recovered within a month, but Om experienced severe pain in his abdominal region. Sanjay Kandasamy, India's First Child to Get a Liver Transplant Grows Up to Become a Doctor, Will Join Same Hospital in Delhi That Treated Him.

Om was referred to a hospital in Panvel, where he was reportedly admitted from August 8-28. The doctors at the medical facility identified a clot and gangrene in his small intestine. A surgery was performed to remove the dead intestinal issues.

The child was then recommended to the Jupiter Hospital in Thane for a transplant of small intestine. The father played a crucial role in saving Om's life as he decided to donate 200 cm of his small intestine for the transplant.

The third hospital where Om was admitted in the last three months finally completed his treatment. The organ transplant took a total of 15 hours, with the team of specialised medical practitioners requiring five hours to remove 200 cm of intestine from Santosh's body, and 10 hours to transplant it in Om's body.

The child, days after the transplant, relished his first normal meal in over 100 days -- the credit for which goes to the team of dedicated doctors who treated him and his father who donated a small portion of his own intestine to save the son.

The case also brings to light the lethality of COVID-19, as the impact of virus may not be restricted to only the respiratory tract and lungs. A similar case was reported in Italy earlier this year, where the intestine of a coronavirus patient was left damaged due

(The above story first appeared on LatestLY on Nov 23, 2020 11:02 PM IST. For more news and updates on politics, world, sports, entertainment and lifestyle, log on to our website latestly.com).