Parts of Punjab, Haryana and Delhi will receive rainfall throughout the day, said the India Meteorological Department (IMD). 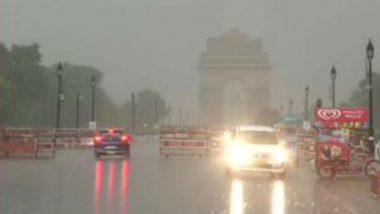 New Delhi, July 29: Parts of Punjab, Haryana and Delhi will receive rainfall throughout the day, said the India Meteorological Department (IMD). In Delhi, rainfall is likely to intensify and the heavy downpour is expected during the next 24 hours, the IMD added. "There will be rainfall in Punjab, Haryana and Delhi throughout the day and rain will increase during the night. Delhi may receive moderate to heavy rain in the next 24 hours," RK Jenamani, Senior Scientist at IMD, told news agency ANI. Kerala Monsoon 2020 Forecast: IMD Issues Orange Alert for Thiruvananthapuram, Kollam, Pathanamthitta and Idukki Districts for Today.

Several parts of Delhi, National Capital Region (NCR), Punjab and Haryana have been receiving monsoon showers since Wednesday morning. An alert for heavy rains has been issued in the national capital on July 29 and 30. "Delhi-NCR is very likely to experience moderate rain with one or two spells of heavy rainfall (more than 65 mm) during the evening of July 29 and July 30," IMD has said in its advisory. Delhi received the first spell of heavy rains on July 19, which submerged low-lying areas in waist-deep water.

The monsoon reached Delhi on June 25, two days earlier than the usual date of June 27. Despite that, the rains had remained subdued in the city in the absence of a strong supportive weather system such as moisture-laden easterly winds from the Bay of Bengal.

(The above story first appeared on LatestLY on Jul 29, 2020 03:33 PM IST. For more news and updates on politics, world, sports, entertainment and lifestyle, log on to our website latestly.com).