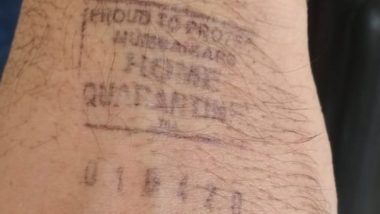 Surat, May 27: Since the novel coronavirus outbreak, state governments are taking various steps to contain the infection. People who are being quarantined at home are inked with quarantine stamp. However, there are some reports coming that people are developing rashes with the ink followed by a burning sensation. Till now, two cases are reported - one each in Gujarat and Goa. Delhi And Chandigarh Label Houses Of Those Under COVID-19 Quarantine; See Pics.

Five of six members of the extended family who were stamped while travelling from Junagadh to Surat developed rashes on their skin, followed by a burning sensation. The family then went to local government health care where doctors gave them medicines and lotion to ease the pain.

“The child kept crying through two nights and could not sleep due to the unrelenting pain caused by the blisters on her skin and it had everyone worried as other family members had shown the same reaction to the ink,” a family member was quoted as saying by Ahmedabad Mirror.

A 26-year-old woman, who had returned to Goa from Mumbai on May 21, also complained of allergic reactions from the ink. According to a report in Money Control, the woman was stamped twice on May 21 – one to declare the date and time and the other stamp sending her to quarantine centre.

The woman immediately started feeling a burning sensation. “One policeman asked me to apply sanitiser on it and the health officials sitting at the stamp desk said the stinging sensation will subside in some time,” she said.

In the next 24 hours, her pain grew sharper and the skin started blistering and then burns appeared. Fearing infection, the woman visited the doctor of her quarantine centre. The doctor prescribed her some tablers and Lacto Calamine.

“When I enquired about the person concerned to whom I can officially complain about this, they (the health officials) did not respond. They only told me that such complaints are very common; several other persons have got burns and blisters from the quarantine stamp ink,” she said.

(The above story first appeared on LatestLY on May 27, 2020 10:56 PM IST. For more news and updates on politics, world, sports, entertainment and lifestyle, log on to our website latestly.com).