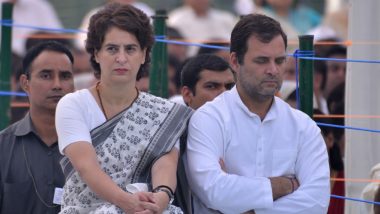 The Congress has asked its party leaders to organise prayer meetings in Valmiki Temples across the country as the victim who was killed in Hathras belonged to the Valmiki Community. Rahul Gandhi, Priyanka Gandhi Vadra Arrested While on Way to Hathras to Meet Gangrape Victim's Family.

The Congress has continuously hit out at the Uttar Pradesh government on the issue of handling of the case and demanding justice for the victim. On Thursday, both leaders tried to visit Hathras to meet the victim's family. However, they were stopped midway and a case was registered against them.

In Delhi, the State unit has organised this meet at the Mandir Marg Valmiki Basti. One of the oldest settlement of the community in the national capital. Congress leader Rahul Gandhi on Friday quoted Mahatma Gandhi in a tweet as he wrote, "I will not bow down to anyone's injustice", a day after he was manhandled, stopped and even arrested by Uttar Pradesh police while he was on his way to Hathras in Uttar Pradesh to meet the family of gangrape victim along with party's general secretary Priyanka Gandhi and other Congress leaders.

" 'I will not fear anyone in the world ... I will not bow down to anyone's injustice, I will win the untruth with the truth and I can bear all the sufferings while opposing the untruth.' Happy Gandhi Jayanti," Rahul tweeted on the occasion of Gandhi Jayanti.

Earlier on Thursday, Rahul and Priyanka were arrested by the Uttar Pradesh Police at Yamuna Expressway here while they were on the way to meet the victim's family, who had died while receiving treatment in Delhi's Safdarjung hospital on Tuesday. The Gandhis were later released. Hathras Gangrape: Rahul Gandhi Arrested Under Section 188, Alleges UP Police Lathicharged Him (Watch Videos).

Both Congress leaders alleged they were manhandled and roughed up by police personnel while they were marching towards Hathras to meet the victim's family. However, Noida Additional Deputy Commissioner of Police (ADCP) Ranvijay Singh said that there was "no lathi charge" on anyone.

The 19-year-old had succumbed to injuries in the Safdarjung Hospital where she was brought on Monday from Aligarh Muslim University Medical College.