"The idea is to break the backbone of small and medium businesses, break the backbone of Indian farmers and to make Indian labourers slaves-- all to make these five or six people happy," he claimed. Lashing out at the RSS, he said its ideology was "anti-Tamil" which is "aimed at weakening the spirit of Tamil people." 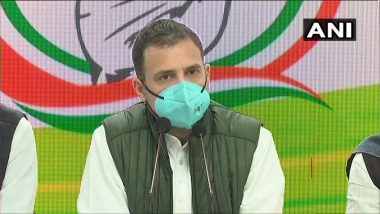 Karur, January 25: Keeping up the attack on the NDA government at the Centre over the new farm laws, Congress leader Rahul Gandhi on Monday said they were "criminal" and vowed to oppose them in the interest of the farmers.

The laws were aimed at benefitting "5-6 people closest" to Prime Minister Narendra Modi, Gandhi said at a farmers' convention at Vangal in this district, as part of his three-day election campaign in poll-bound Tamil Nadu which began on Saturday. Rahul Gandhi Appeals to People To Speak Up for Farmers For Scrapping of Farm Laws Ahead of Eighth Round of Talks Between Farmers and Government.

He alleged that Modi wanted the farmers to negotiate with "huge corporates" rather than the ryots going to mandis or negotiating with small traders. "The result is going to be that millions of people who are employed by this agriculture system-- farmers, labourers, loaders, small traders-- all these people are going to be unemployed," he claimed.

"...they are trying to help 5-6 people closest to the Prime Minister and they are hurting the interest of millions and millions of farmers," he said about the Centre. Referring to the protesting farmers from Punjab and Haryana, Gandhi said "the Prime Minister is calling them terrorists."

"So we are stopping these laws and protecting your interests. These are criminal laws against the farmers of India...they are trying to replicate a failed model," Gandhi added. When a participant at the interaction explained the farm laws, Gandhi quipped he would make a "better agiculture minister," taking an apparent dig at incumbent Narendra Singh Tomar.

He alleged that farmers have no access to information "because information is purposely hidden from them." He charged the Central government with attacking the foundation of the country-- labourers, workers, farmers and fishermen.

"And it is our duty to protect the interest of workers, farmers, fishermmen and weavers," Gandhi, who rode a bullock cart to arrive here, said. While there was no shortage of money in the country, it was not being given to the poor, he added.

He also flayed the Centre's earlier demonetisation and Goods and Services Tax (GST), wanting to know how many from the crowd benefitted from them.

Earlier, at a roadshow in the district, Gandhi questioned Centre's "one language, one culture, one history" concept.

Saying he was reading the Tamil classic Tirukkural, Gandhi said it mentioned about the Tamil spirit a 1000 years ago. "This positive attitude, self respect--I realised is not something new..it is wedded in your history, language, food, everywhere and then I noticed that the Prime Minister of this country does not respect this spirit."

Charging Modi with "remote controlling" the Tamil Nadu government, Gandhi asked why central agencies were not probing corruption in the state. "In every opposition (ruled)state, Prime Minister Modi uses the CBI and ED to attack the opposition. Why is the investigation into corruption in Tamil Nadu stopped."

Gandhi said that in the coming election the people of Tamil Nadu "are going to take the battery out of the remote control and throw it away," implying a new government will be in place. "I am here to help you get a government that listens to the Tamil spirit, listens to poor people," Gandhi, whose Congress is an ally of the MK Stalin-led DMK in the state, said.

Assembly elections are likely in Tamil Nadu by April-May. Gandhi further charged Modi with working for a select few industrialists. "Narendra Modi works for five or six big industrialists. Every thing he does is to help these five people improve their financial position. Demonetisation, GST, the way he behaved during corona--everything is designed to help those five people," he alleged.

"The idea is to break the backbone of small and medium businesses, break the backbone of Indian farmers and to make Indian labourers slaves-- all to make these five or six people happy," he claimed. Lashing out at the RSS, he said its ideology was "anti-Tamil" which is "aimed at weakening the spirit of Tamil people."

"We will never allow it," he asserted. Earlier, the Congress MP was accorded a rousing reception and he shook hands with many people who had turned up to have a gimpse of him and also posed for pictures with some.