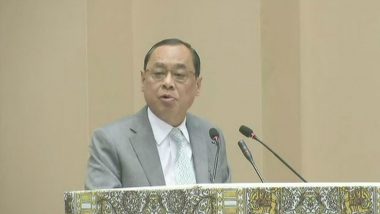 New Delhi, August 5: Rajya Sabha MP Ranjan Gogoi, who also served as the Chief Justice of India (CJI), has denied reports that claimed he had tested positive for coronavirus (COVID-19). Speaking to a portal, Justice (Retired) Gogoi said: "The news is incorrect". The clarification came after some regional media portals claimed that Gogoi had contracted coronavirus (COVID-19). List of Indian Politicians Who Tested Positive For COVID-19: From Amit Shah to Shivraj Singh Chouhan, Here Are All Those Who Contracted Coronavirus.

Ranjan Gogoi was one of the five judges of a constitution bench of the Supreme Court, which had in November last year, ruled unanimously in favour of building a Ram temple at the disputed site in Ayodhya. The bench had also granted a five-acre land to the Muslim parties for the construction of the mosque elsewhere in Ayodhya. He was also among the four sitting top court judges who had held a first-of-its-kind press conference in January 2018 when Dipak Misra was the CJI. Kamal Rani Varun, Cabinet Minister in Uttar Pradesh, Dies of COVID-19 in Lucknow.

Ranjan Gogoi Confirms He Is Not COVID-19 Positive:

After reports surfaced that former Chief Justice of India and Rajya Sabha MP, Ranjan Gogoi tested positive for #COVID19, Justice Gogoi confirms to @barandbench that the "news is incorrect." pic.twitter.com/5GDzGyKSaP

(The above story first appeared on LatestLY on Aug 05, 2020 11:47 AM IST. For more news and updates on politics, world, sports, entertainment and lifestyle, log on to our website latestly.com).