The 30 km distance between the two villages was covered in about 20 minutes via copter. The little girl's father Hanuman Ram Prajapat took his daughter in his arms and deboarded the helicopter amid cheering of crowds. 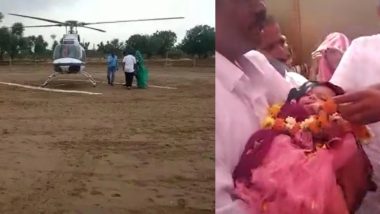 Jaipur, April 22: A new born daughter was accorded rather an unusual welcome in a Rajasthan village and brought home in a helicopter with bands walking along her side after she landed and roses were spread throughout the way till the time she reached her sweet home.

The celebration was grand as she is the first daughter to have been born in this family after 35 years. Hence the father spent Rs 4.5 lakh to hire this copter and make the celebration grand.

Village folks of Nimbdi Chandawata in Nagaur district turned up in large numbers to see the chopper landing in their village and catch a glimpse of the baby girl. The daughter was born at her maternal grandfather's home two months ago. She landed in her paternal village on the auspicious occasion of Ramnavami, when villagers sang bhajans and showered flowers on the baby and her mother.

The little girl's grandfather Madan Lal Kumhar decided to bring the girl home in a helicopter and took permission from the district collector for the same as well as to build helipads both in her maternal and paternal villages.

The 30 km distance between the two villages was covered in about 20 minutes via copter. The little girl's father Hanuman Ram Prajapat took his daughter in his arms and deboarded the helicopter amid cheering of crowds.

He said, "By bringing my new born daughter in a helicopter, I want to give a message that daughter's birth should be celebrated like a festival."

No doubt rural Rajasthan did set up a legendary example to turn the tide in daughter's favour by giving a remarkable chopper ride of warm welcome to the newborn baby.

(The above story first appeared on LatestLY on Apr 22, 2021 03:50 PM IST. For more news and updates on politics, world, sports, entertainment and lifestyle, log on to our website latestly.com).