Huge deposits of Uranium and associated minerals have been found on a wide spread area of 1086.46 hectares which has opened both employment and investment avenues for Rajasthan. 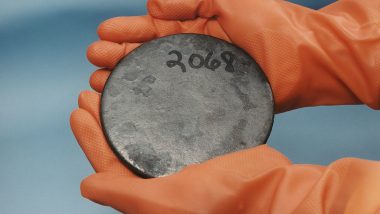 Jaipur, June 27: After Jharkhand and Andhra Pradesh, huge deposits of Uranium have now been found in Rajasthan following which preparations are in full swing to start mining in the Khandela area of Sikar. Huge deposits of Uranium and associated minerals have been found on a wide spread area of 1086.46 hectares which has opened both employment and investment avenues for Rajasthan.

Around 12 million tonnes of uranium and other elements are expected to be lying deep down under this area, officials said adding that "the Rajasthan government issued LOI (Letter of Intent) for mining in the perspective of making official entry of the state into the uranium mining sector." Uttar Pradesh: Yogi Adityanath Government to Launch Portal for Direct Mineral Purchase.

Dr Subodh Agrawal, Additional Chief Secretary, Mines and Petroleum Department of the state said: "Rajasthan Government issued a letter of intent to 'Uranium Corporation of India' for mining of uranium ore in Rohil, Khandela tehsil near Sikar. After Jharkhand and Andhra Pradesh, huge deposits of uranium have been found in Rajasthan. Uranium is considered one of the rarest minerals in the world. It is a very valuable mineral for nuclear power. Uranium Mining has opened doors for investment, revenue and employment while taking Rajasthan on the world screen. Rajasthan: Pinjara Pol Goshala Builds 6-Storey Building To House Birds in Jaipur (See Pics).

The officials confirmed that Uranium Corporation of India Limited (UCIL) will invest about Rs 3,000 crore and around 3,000 people will get direct or indirect employment. ACS Dr Subodh Aggarwal said that till now uranium mining was being done in Jadugoda of Singhbhumi in Jharkhand and Andhra Pradesh. After completing the necessary formalities, mining shall start in Rajasthan also and other ancillary industries will also be set up in the state on the basis of products produced with uranium. Apart from nuclear energy, Uranium finds use in defence, medicine, photography and other segments.

(The above story first appeared on LatestLY on Jun 27, 2022 03:48 PM IST. For more news and updates on politics, world, sports, entertainment and lifestyle, log on to our website latestly.com).