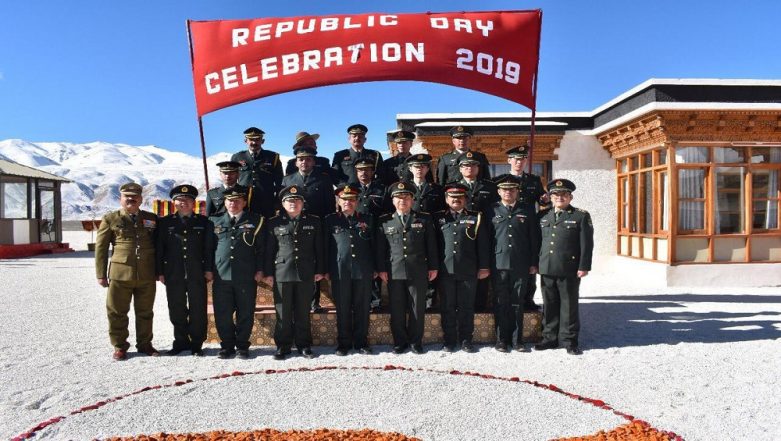 New Delhi, January 26: Border Personnel Meetings (BPM) between armies of India and China held on Saturday on the occasion of the 70th Indian Republic Day at five different locations. One of the meetings was held at Indian BPM huts in Chushul-Moldo and DBO-TWD meeting points of eastern Ladakh. In the meeting both sides sought to build upon the mutual feelings of maintaining peace and tranquillity along the border, a defence spokesperson said. The Indian delegation was led by Brigadier V K Purohit and Colonel S S Lamba while the Chinese delegation was led by Senior Colonel Bai Min and Colonel Song Zhang Li. Republic Day 2019 Celebrations: ITBP Jawans Hoist National Flag at 18,000ft in Minus 30 Degrees in Ladakh (Watch Video).

Meanwhile, the other meeting was held at Kibithu on the Indian side of the Line of Actual Control (LAC). The Indian delegation was led by Brigadier Robi Kapoor of Dao Division of the Army while Senior Colonel Xu Hong Gang led the Chinese delegation. The Kibithu-Damai border meeting mechanism was started as a confidence-building measure to resolve local boundary issues and has been instrumental in maintaining peace and tranquillity along the LAC since 2014. Indian Soldiers Teach Bhangra to Chinese Troops, Dance Together in This Viral Video.

A cultural program showcasing the rich culture and heritage of the country was also presented by the Indian Army. Apart from these three locations, BPMs were also held at Nathu La in Sikkim and at Maitri Sthal in BumLa of Tawang. Meanwhile, Indo-Myanmar Post Level meetings were also held during the day between Assam Rifles and Myanmar Army at nine different locations of the North East including Arunachal Pradesh, Nagaland, Manipur and Mizoram.