A political controversy has erupted over the rejection of West Bengal, Maharashtra and Kerala's tableau proposals for the Republic Day 2020 parade. 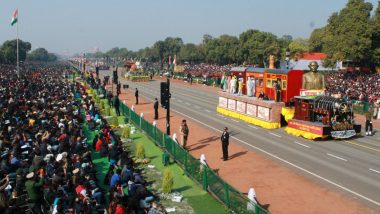 According to the government, tableau proposals were selected after a series of five meetings. Nationalist Congress Party (NCP) lawmaker Supriya Sule alleged the Modi government was behaving in a "prejudiced" manner. The Trinamool Congress (TMC) criticised the Centre over the rejection of West Bengal's Republic Day tableau and called it discriminatory.

"The state was being targeted for opposing the new citizenship law (CAA) and a proposed nationwide National Register of Citizens (NRC)," the TMC said. Kerala Law Minister A K Balan also alleged that the Centre's move was politically motivated. The Defence Ministry which takes the final call of tableau proposals, however, denied the allegation, adding that of the 56 proposals, only 22 were accepted.

(The above story first appeared on LatestLY on Jan 03, 2020 11:08 AM IST. For more news and updates on politics, world, sports, entertainment and lifestyle, log on to our website latestly.com).