Globally, over 119,400 confirmed cases of Coronavirus have been reported among which over 4,300 people have succumbed to the virus. Talking about the global markets, the Wall Street stocks plunged on Wednesday. 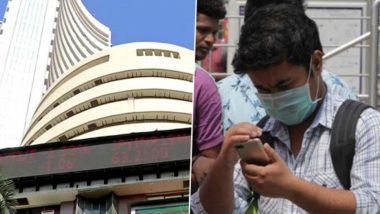 Sensex falls due to outbreak of coronavirus (Photo Credits: ANI/IANS)

Mumbai, March 12: On Thursday Sensex recorded the worst fall since 2008, by ending almost 3,000 points down. The markets opened in the red and continued to tread in the negative terrain tracking weak global markets which were rattled after the World Health Organisation declared the novel coronavirus outbreak a "pandemic". The Sensex ended the day at 32,778, down 2,919 points (8 percent). Nifty, on the other hand, ended the Thursday session at 9,590, down 868 points (8.30 percent). Nifty50 index breached the psychological mark of 10,000 today for the first time since March 26, 2018. All the sectoral indices on the BSE and NSE were trading in the red.

The Dalal Street mayhem wiped off investor wealth worth over Rs 10 lakh crore today. The rupee plunged 82 paise to 74.50 against the US dollar in early trade on Thursday.  In India, the number of confirmed coronavirus cases shot up to 73 on Thursday, with Kerala being the worst affected with 17 cases, followed by Maharashtra. On the BSE index, all the scrips ended in the deep red with SBI down 13.23 percent, followed by ONGC and AXIS Bank, down 12 percent each.

Globally, over 119,400 confirmed cases of Coronavirus have been reported among which over 4,300 people have succumbed to the virus. Talking about the international markets, the Wall Street stocks plunged on Wednesday. Coronavirus Outbreak: Donald Trump Says 'US Will Suspend All Travel From Europe to US For Next 30 Days' to Control the Spread of COVID-19.

The Asian markets echoed similar sentiments, with MSCI's broadest index of Asia-Pacific shares outside Japan losing 4.1 per cent to its lowest level since early 2019, and Japan's Nikkei dropping 5.3 per cent. Australia's benchmark dived 7.4 per cent while South Korea's KOSPI fell 4.6 per cent to a four-and-a-half-year low.

US President Donald Trump announced on Wednesday that the country will suspend all travel from Europe to the United States for the next 30 days. According to an ANI tweet, the new rules will go into effect from Friday at midnight. The decision has been taken by the government to control the spread of the deadly disease.

(The above story first appeared on LatestLY on Mar 12, 2020 04:14 PM IST. For more news and updates on politics, world, sports, entertainment and lifestyle, log on to our website latestly.com).