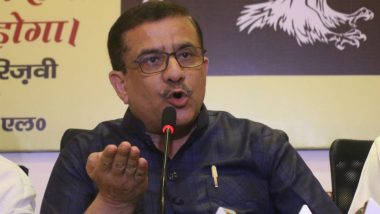 The two leaders have demanded a ban on such organizations for alleged involvement in anti-national activities. Tablighi Jamaat: 19 Out of 27 People Who Participated in Nizamuddin Markaz Event in Delhi Test Negative for COVID-19 in Odisha.

Mohsin Raza, the only Muslim face in UP government, said: "An extremist organization has displayed anti-India behaviour at a time when the country is unitedly fighting against coronavirus. They defied government order to hold the congregation. The organization's international funding should also be looked into and legal action must also be taken."

Earlier, in a video message, Rizvi alleged that Tablighi Jamaat had deliberately got its followers infected with coronavirus and sent them to India so that maximum people got infected.

"Such a mentality deserves death and nothing less. The organization should be banned," he stated.

Meanwhile, Sardar Parvinder Singh, member, UP Commission for Minorities, who has written a letter to Prime Minister Narendra Modi, said that the statements made by Maulana Saeed, convener of Nizamuddin Markaz Tablighi Jamaat, could disturb communal harmony in the country.

"Tablighi Jamaat went against the directions of Delhi and central governments which barred gatherings of more than 50 people. They also violated prohibitory orders (Section 144 of CrPC) putting innocent people at risk. The organization should be banned nationally," he stated.

He further said: "The convener of Jamaat has said that convention is being targeted by non-Muslims and is asking the youths to stay with their brethren. All these statements can disturb communal harmony."

(The above story first appeared on LatestLY on Apr 03, 2020 10:49 AM IST. For more news and updates on politics, world, sports, entertainment and lifestyle, log on to our website latestly.com).