Shikari Kuttiyamma, Kerala's First and Only Female Hunter Who Wanted to be a Nun, Dies at 87 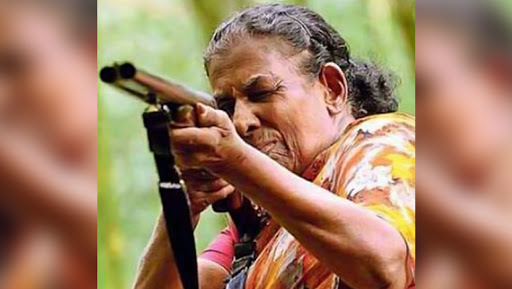 Kottayam, August 21: Thresiamma Thomas, popularly known as 'Shikari Kuttiyamma' in Kerala and all of South India, died on Monday at the age of 87. She was the first and the only woman hunter in Kerala and her fame spread far and wide during her active years.

The veteran lady from her field left the world at her residence. She is survived by her only son, VT Joseph. Their home is in Kappad. Shikari Kuttiyamma breathed her last at 5.30 AM in the morning on Monday. The funeral was held at St Anthony's Church at Kappad on Tuesday.

From the age of 25, Kuttiyamma started hunting wild animals in the Chinar forests. The risky job required her to enter the "heart of the jungle" as he ventured deep into it for the kill.

Kuttiyamma wanted to be a nun and was also studying for the same in Raichur. However, the turn of events forced her to hunt after the hospital her brother was admitted, asked for animal meat as the fees for surgery.

That's when Shikari Kuttiyamma entered the forest and killed a bison. She later took up killing wild animals as a profession. Such was her reputation, that people settled down in Chinar forest area, as they had Kuttiyama to protect them.