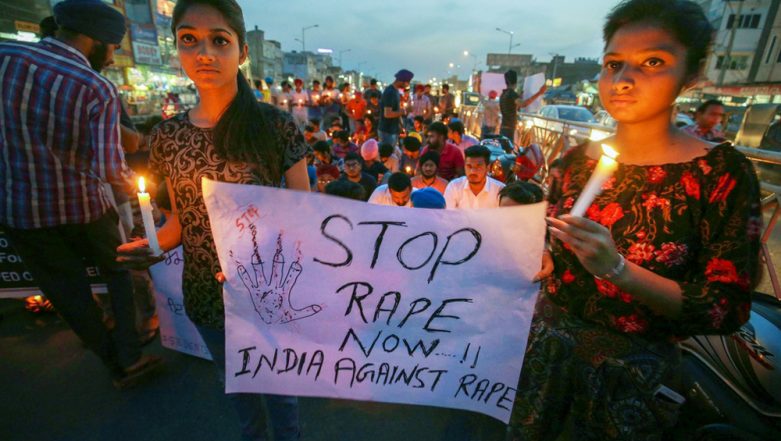 Patna, November 30: In a shocking incident, a prisoner of the Sitamarhi jail in Bihar was allegedly raped by two persons earlier this month. According to a tweet by ANI, the lady prisoner was allegedly raped by two persons on the night of November 14. Reports further inform that the incident took place in the washroom at Sri Krishna Medical College and Hospital (SKMCH) in Muzaffarpur. NGO Manager Taught Girls How to Have Sex at Muzaffarpur Shelter Home: CBI.

According to reports, the woman was taken to Sri Krishna Medical College and Hospital (SKMCH) for treatment on November 11. A case has been registered and police have initiated an investigation into the brutal incident. Muzaffarpur Shelter Home Rape Cases: Supreme Court Lashes Out at Bihar Government Over Milder FIR, Says 'Act Fast or Face Consequences'.

Bihar: A prisoner of Sitamarhi jail was allegedly raped by two persons on the night of November 14 in the washroom at Sri Krishna Medical College and Hospital (SKMCH) in Muzaffarpur, where she was taken for treatment on November 11. Case registered, investigation underway pic.twitter.com/yZ46gzKLPs

In the last week, a local court in Bihar had awarded 12 year-jail term to a man for raping his minor sister-in-law last year in Sheikhpura district of the state. The incident took place in June 2017, when the man, during his visit to his in-laws' house after marriage, raped his minor sister-in-law (wife's sister). According to a report by PTI, the incident was confirmed in a medical examination report. Bihar Shocker: School Principal, Clerk Rape Minor Girl For Over 9 Months.

The accused was identified as Rajiv Mahto. A special Protection of Children from Sexual Offences (POCSO) court Additional District and Sessions Judge Gyanendra Kumar Srivastava held him under relevant sections of the POCSO and sentenced him to 12 years of imprisonment.