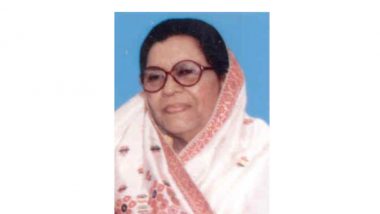 Guwahati, September 28: Syeda Anwara Taimur, the only woman chief minister in the history of Assam, died in Australia on Tuesday. The 84-year-old was residing in the country with her son since the past four years. On her demise, Prime Minister Narendra Modi, Chief Minister Sarbananda Sonowal and other state leaders paid tribute. NRC of Assam: Name of Former CM Syeda Anwara Taimur Missing From Final Draft.

"Condolences to the family and well-wishers of former Assam CM Syeda Anwara Taimurji. Her contribution towards Assam’s development will be remembered. May her soul rest in peace," PM Modi said.

Sonowal also condoled the demise, recalling her as a respected veteran leader of the state. State Health Minister Himanta Biswa Sarma paid a moving tribute on Twitter, saying that she was an able and efficient administrator.

"An able administrator and affable people’s person, Syeda Mam was the only woman CM of Assam. A 4-term MLA, she had an illustrious political career spanning over 4 decades. My prayers and condolences," Sarma tweeted.

Condolences to the family and well-wishers of former Assam CM, Syeda Anwara Taimur Ji. Her contributions towards Assam’s development will be remembered. May her soul rest in peace: PM @narendramodi

Assam Governor Jagdish Mukhi also issued a statement to mark his tribute. "Saddened to know about the death of former CM Syeda Anwara Taimur-a veteran mass leader who championed the cause of politics with an undertone of people’s development. I convey my heartfelt condolences to the bereaved family members," he said.

Notably, Syeda served as the Chief Minister of the northeastern state between 1980-81. Prior to her becoming the CM, she held the key portfolio of education as the state cabinet minister. In 1988, she was nominated to the Rajya Sabha. In 2011, she had joined the All India United Democratic Front (AIUDF).

(The above story first appeared on LatestLY on Sep 28, 2020 09:57 PM IST. For more news and updates on politics, world, sports, entertainment and lifestyle, log on to our website latestly.com).