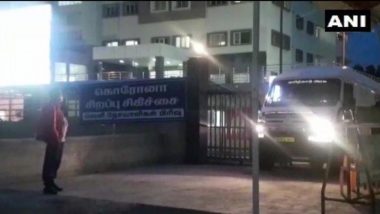 On Saturday, according to reports, wife of Inspector Palthurai petitioned the Madurai city police commissioner seeking his help to shift her husband to a private hospital for treatment. Palthurai was shifted to the Government Rajaji Hospital after he tested positive for coronavirus. Tuticorin Custodial Deaths Case: All About The Killing of Jayaraj and Bennicks That Has Drawn Parallels With George Floyd's Murder.

10 accused policemen, arrested in connection with the custodial deaths of Jayaraj & Bennix in Tuticorin, were lodged at Madurai Central Prison pic.twitter.com/RJEqGPpcXF

Sridhar, an inspector accused in the Thoothukudi custodial deaths case, was taken to the Government Rajaji Hospital from Madurai Central Jail last month after complaining of chest pain.

Thoothukudi Custodial Death is about a father-son duo who was killed due to the alleged brutal torture inflicted upon them in police custody. The ghastly incident of crime took place in Tuticorin district.

They were arrested for allegedly keeping their shop in Sathankulam opened beyond the permissible hours. The father-son duo was subjected to a lethal beatdown in the prison. Jayaraj succumbed to the injuries on June 22, whereas, Bennicks died on June 23. The custodial deaths sparked outrage across Tamil Nadu as two civilians were "killed" for a minor offence.

(The above story first appeared on LatestLY on Aug 10, 2020 10:22 AM IST. For more news and updates on politics, world, sports, entertainment and lifestyle, log on to our website latestly.com).