According to reports, Gawande is three years senior to Tina and is a 2013 batch IAS Officer. At present, Gawande is serving as Director, Archeology & Museums, Rajasthan. 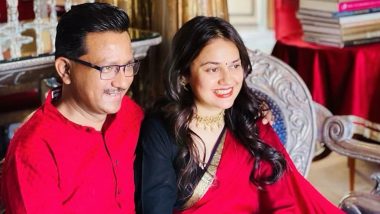 Mumbai, March 29: UPSC 2016 topper and IAS officer Tina Dabi on Monday took to Instagram to announce her engagement. Dabi, who is currently serving as the Joint Secretary of the Finance Department of Rajasthan is going to marry IAS Officer Pradeep Gawande. "I am wearing the smile you (PradeepGawande) gave me, fiance," Dabi wrote while sharing the news with over 1.4 million followers.

Dabi's fiance and IAS officer Pradeep also shared a photo of the two on Instagram. In the picture, Tina is seen wearing a red saree, while Pradeep is seen complimenting her with a matching red kurta and pants. "Together, is my favourite place to be!,” he captioned his post.

If reports are to be believed, the couple will tie the knot on April 22 in Jaipur. According to reports, Gawande is three years senior to Tina and is a 2013 batch IAS Officer. At present, Gawande is serving as Director, Archeology & Museums, Rajasthan.

The Indian Administrative Service officer was previously married to IAS Athar Khan. In 2016, the couple made headlines when Tina announced their relationship. Interestingly, Athar Aamir Khan had secured the second position in the UPSC all-India examination which Tina Dabi topped.

(The above story first appeared on LatestLY on Mar 29, 2022 10:12 AM IST. For more news and updates on politics, world, sports, entertainment and lifestyle, log on to our website latestly.com).