The Dargah Ala Hazrat in Bareilly has issued a fatwa against Ghaus Mohammad and Riyaz Attari, the two accused in the murder of a tailor in Udaipur. 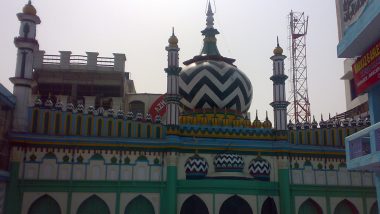 Bareilly, July 7: The Dargah Ala Hazrat in Bareilly has issued a fatwa against Ghaus Mohammad and Riyaz Attari, the two accused in the murder of a tailor in Udaipur.

Maulana Shahabuddin Razvi, the national secretary-general of Barelvi Ulema, said Aala Hazrat has ruled that if a person kills someone under an Islamic regime "without the permission of the emperor, then such a person would be a criminal in the eyes of the Sharia" and would be punished severely. Udaipur Tailor Murder: SHO, 2 Circle Officers Suspended for Negligence.

He further stated that under non-Islamic governments, such killings would be anyway deemed illegitimate according to the law of the land and the person would put his life in danger by committing such crime.

Razvi underlined that the slogans calling for beheading of those who insult the Prophet were first given by Tehreek-e-Labbaik Pakistan, a far-right Islalmic extremist political party in the neighbouring country, to fulfill their political ambition.

The killers of Kanhaiya Lal were heard raising the slogan "Gustakhi e Nabi ki Ek Hi Saza, Sar Tan se Juda Sar Tan se Juda," (there is only punishment for insult to the Prophet, beheading) in a video in which the duo were boasting about the murder.

The Rajasthan Police also arrested three people, including a cleric, in Ajmer for delivering a hate speech in which they allegedly called for beheading to avenge the insult to the Prophet.

"Muslims should not take the law in their own hands, complain to the government, it is the government's job to punish," Razvi added.

The Ala Hazrat Dargah in Bareilly had joined other Muslim organisations in condemning the violent incident in Udaipur where a tailor was slain for supporting BJP leader Nupur Sharma's statement on the Prophet.

In a statement issued last week, Maulana Shahabuddin Razvi said that the incident had made the entire community bow its head with shame and remorse.

(The above story first appeared on LatestLY on Jul 07, 2022 01:29 PM IST. For more news and updates on politics, world, sports, entertainment and lifestyle, log on to our website latestly.com).