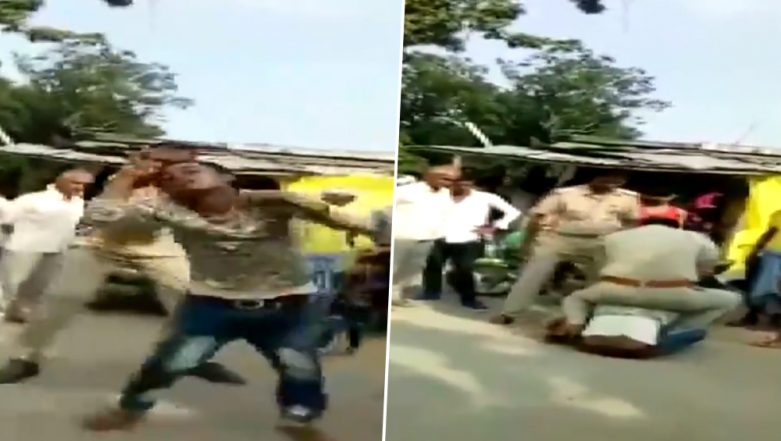 Lucknow, September 13: Two Uttar Pradesh policemen were filmed on camera thrashing a man mercilessly allegedly after he indulged in an argument with them. The video of the incident, which took place in Siddharth Nagar district on Thursday, shows two cops dragging the man on the road and slapping and kicking him. The video also shows a helpless little boy witnessing his uncle getting beaten up by the policemen. Uttar Pradesh Police Point Guns at Commuters for Regular Checkings in Badaun; Watch Video.

According to local media reports, Rinku Pandey, who was riding a motorcycle, allegedly entered into an argument with sub-inspector Virendra Mishra and head constable Mahendra Prasad when they stopped him to check documents. However, what triggered the policemen remains unclear. In the video, Mishra and Prasad abused Pandey assaulted Pandey and verbally abuse him. Uttar Pradesh Police Constable Comforts And Feeds Old Destitute Woman, Receives Letter From DGP Praising Her Deeds.

UP Cops Thrash Man in Public:

One of the cops even sits on Pandey when he was pinned down. The victim was also pulled by his hair. The child, who was with Pandey, also seems to have injured his hand. "If it is my fault, you can lock me up in jail," the man tells the policemen in Hindi. The policemen also try to snatch motorbike's key from Pandey who resists and asks: "Tell me, what is my fault?"

After the video of the assault went viral, the Uttar Police suspended Mishra and Prasad. A departmental inquiry has also been ordered.