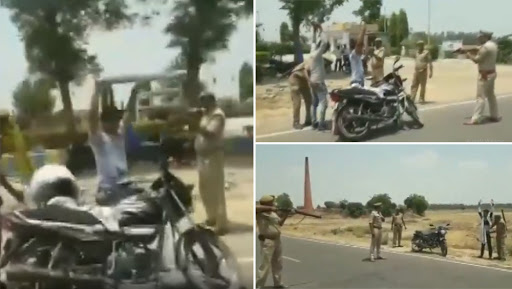 Lucknow, June 24: Uttar Pradesh police are known for taking action on crimes differently and its personnel often become the headlines. In the latest, police personnel in UP's Badaun district could be seen pointing their guns at commuters and forcing them to hold up their hands while checking their vehicles. The video of these incidents has gone viral.

According to the viral video, shot at Bagren police outpost in Wazirganj, outpost-in-charge Rahul Kumar Sisodia could be seen shouting threats at commuters while asking for the papers and helmets, reports ANI. Even the constables could be seen pointing their weapons at commuters, shouting warnings to them. UP Police Conduct Checks At Gunpoint, Call It 'Tactical Technique' to Avoid Casualties

Making the clarification for such a move, SSP Badaun Ashok Kumar Tripathi said, as quoted by news agency, "There have been incidents earlier where people of criminal mentality fired at the police during vehicle checking. We have suffered casualties due to such incidents, that is why a tactical technique is being used."

However, this new method is not like by the commuters as they feel these things are humiliating for them Sharing his experience, a businessman Raj Kumar Agarwal said, "If you are driving and the cops want to stop you, they will do that with a gun in hand. The method is so intimidating and humiliating for the common man. The cops make no concession even if the driver is a woman."