UP Shocker: Man Shot at During Brawl over Bursting of Crackers in Noida; 2 Accused Arrested

A was allegedly shot at during a brawl for bursting of crackers in Noida on Thursday. The victim sustained injury and was rushed to a hospital. Police have arrested two accused in the matter, while other two are on a run. 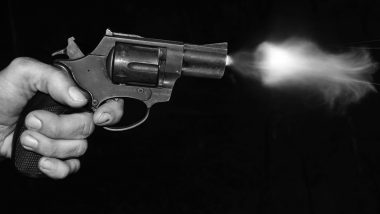 Lucknow, November 6: In a shocking incident, a man was allegedly shot at during a brawl over bursting of firecrackers on Diwali night, Thursday in Gadhi Chaukhandi village in Noida. Report inform that the victim, identified as Vineet, was rushed to the hospital. A case has been registered against four accused under section 307 and section 504 of the Indian Penal Code n the matter and two have been arrested, while the other two remain at large.

According to report by Hindustan Times, Vineet had came to his maternal uncle's, identified as Rajveer, place to celebrate Diwali and was bursting crackers outside his house when two others, identified as Sunil and Gopal, also started bursting firecrackers at the spot. However, Rajveer and Vineet asked the duo to not burst the crackers outside his home, but they continued to do the same, leading to an argument between the them. UP Shocker: 'Homosexual' Man Arrested for Sodomising 5 Minor Boys on Pretext of School Admission in Varanasi.

Following which, Rajveer and Vineet allegedly started beating the other two with lathis. SHO Phase 3 Police Station, Vivek Trivedi reportedly said that Sunil and Gopal took shelter inside a tour operator's office, where the tour operator, identified as Rajkumar, and his father were sitting. Rajveer allegedly hit Rajkumar and his father with the lathis. Rajkumar allegedly pulled out his licensed revolver and threatened the four to leave his office, however they continued to fight. UP Shocker: Retired IAF Officer Injected Poison by Brother-in-Law, Dies.

Rajkumar then allegedly fired a shot at Vineet who, after sustaining injury at his chest and was rushed to a private hospital. A case has been registered in this regard, two of the accused - Gopal and Rajkumar- have been arrested while the other two- Sunil and Rajkumar's father- are still on run. The police have also seized the licensed gun used in the alleged crime from the accused.

“We have seized the licenced gun used in the crime. A case has been registered against four persons--Sunil, Gopal, Rajkumar and his father--under Sections 307 (attempt to murder) and 504 (intentional insult with intent to provoke breach of peace) of the IPC. The arrested suspects will be produced in court and sent to judicial custody,” SHO Vivek Trivedi was quoted as saying by the HT.

(The above story first appeared on LatestLY on Nov 06, 2021 09:51 AM IST. For more news and updates on politics, world, sports, entertainment and lifestyle, log on to our website latestly.com).