Uttar Pradesh Chief Minister Yogi Adityanath on Monday blessed over 1,000 couples who tied the knot during a mass marriage ceremony and urged people to collectively take a pledge to end malpractices like child marriage and dowry. 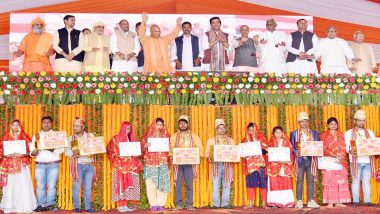 Gorakhpur, November 28: Uttar Pradesh Chief Minister Yogi Adityanath on Monday blessed over 1,000 couples who tied the knot during a mass marriage ceremony and urged people to collectively take a pledge to end malpractices like child marriage and dowry.

As part of the state government's thrust on pro-women, pro-rural and pro-poor initiatives, a mass marriage programme was organised in Gorakhpur, under the 'Mukhyamantri Samoohik Vivah Yojana'. Yogi Adityanath Govt in Uttar Pradesh to Add 352 Additional PICUs in 72 Districts to Ensure Better Health Facilities for Children.

Extending his wishes to the couples, the chief minister said, "The mass marriage scheme implemented in 2017 was to ensure that daughters from financially weaker sections are married in a respectable manner." UP: Temple Dedicated to CM Yogi Adityanath Opens Up in Ayodhya’s Maurya Ka Purwa Village (See Pics).

Under the scheme, an amount of Rs 31,000 was first fixed for the marriage of each couple and then it was increased to Rs 51,000. So far, about two lakh marriages have been performed successfully, he said.

The chief minister said, "Today is ‘Vivah Panchami' and on this auspicious day, the marriage of Lord Ram and Mata Janaki took place. It is our good fortune to witness the marriage of so many couples on this holy day."

He also said by becoming a part of mass marriages, every person should contribute towards curbing social evils existing in our society.

The chief minister further said that the double-engine government, under the leadership of Prime Minister Narendra Modi, is working with commitment and honesty to benefit every section of society without any discrimination.

"The mantra of ‘Sabka Saath, Sabka Vikas', given by PM Modi in 2014, is visible in the state today," Adityanath said. Enumerating the government's welfare work, he said, "One crore families in the state are getting the benefits of old age, destitute and disabled pension schemes and about 15 crore people are getting the facility of free ration since the pandemic."

The couples who got married included people belonging to all religions and castes. The chief minister also presented certificates and gifts to 14 newlyweds including two couples from the minority community and interacted with them.