In view of the shortage of medical staff in Uttar Pradesh, Chief Minister Yogi Adityanath has decided to increase the retirement age of doctors from 65 years to 70 years. 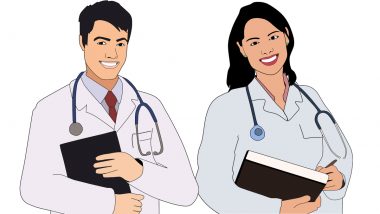 Lucknow, September 19: In view of the shortage of medical staff in Uttar Pradesh, Chief Minister Yogi Adityanath has decided to increase the retirement age of doctors from 65 years to 70 years. Uttar Pradesh medical education minister, Suresh Khanna, said that the cabinet will soon be passing a proposal in this regard as the government believes that this will help the state in fighting the corona pandemic and other diseases with much more experienced doctors.

Doctors with more experience are needed at the moment, he told reporters. "After retirement, doctors open their private clinics, but it will be better that they give their services to us. Keeping this in view, we have prepared the proposal. Yogi Adityanath has also given his consent on this and soon it will be approved by the cabinet," he said. Uttar Pradesh: Government Doctor Booked for Blackmailing Nurse, Probe Ordered.

The minister further said, "The Yogi Adityanath government has fulfilled every promise of the Lok Sankalp Patra so far in its tenure. Under the leadership of Yogi Adityanath, we have done those things which were difficult for the SP and BSP to even imagine. Right now, the situation in the other states is very bad regarding Corona, but today in UP, there are more than 35 such districts, which have become free from Corona."

"Even in the matter of vaccination, we have left the rest of the states far behind. Today, more than 50 per cent of the population in UP has taken the first dose of the vaccine. The number of medical colleges opened by this government has not been opened in any previous government," he added.

(The above story first appeared on LatestLY on Sep 19, 2021 01:17 PM IST. For more news and updates on politics, world, sports, entertainment and lifestyle, log on to our website latestly.com).