Uttar Pradesh: Upset Over Wife’s Alleged Affair With Neighbour Man Climbs on Tower With Kids and Threatened To Commit Suicide in Kanpur Dehat 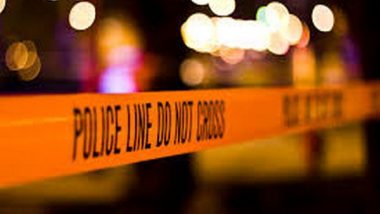 Kanpur Dehat, January 25: High drama was witnessed in Kanpur Dehat for over an hour when a man, upset over his wife's alleged affair with a local man, climbed the tower with his children and threatened to commit suicide. The incident took place on Monday near Gandhi Nagar in Akbarpur, when the man threatened to commit suicide after throwing his kids down from a height of nearly 40-feet.

Chaos prevailed around the area and the locals informed the police that rushed to the spot. After about half-an-hour of convincing, the police managed to bring him and his children down.

The man told the police that his wife's affair was going on with his neighbour. He had complained to the police, but no action was taken. Police said that as per the man, his wife had developed an illicit relationship with a man, living nearby their house. "As per the man, in his absence, his neighbour visited his house often. He said that he had reprimanded his neighbour many times, but to no avail," said the police. Tamil Nadu Shocker: Man Arrested For Hacking Wife to Death With Sickle After Argument Over Affair.

The man had also lodged a complaint with the police but no action was taken. On the other hand, Akbarpur police said that on the basis of the complaint, action for breach of peace has been taken against the neighbour accused of luring his wife. Circle officer (CO) Akbarpur Arun Kumar said that the police are trying to sort out the issue. "Whatever action is appropriate will be taken," the official added.

(The above story first appeared on LatestLY on Jan 25, 2022 09:38 AM IST. For more news and updates on politics, world, sports, entertainment and lifestyle, log on to our website latestly.com).