Rishabh Chaturvedi learned music and singing from a very young age from his own parents, who are well-known in Punjabi Music Industry. From a young age, he aspired to become an accomplished singer and secured second place in Amul Star Voice of India Chote Ustad season 2. 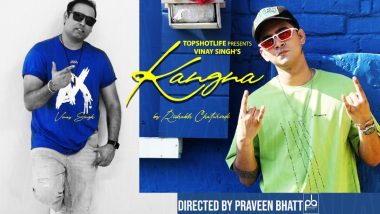 After back to back successful music videos, Vinay Singh, the CEO and Founder of TopShotLife, is coming up with its first Bhangra track “Kangna” by charming and jolly “Rishabh Chaturvedi” and directed by “Praveen Bhat”.

Rishabh Chaturvedi learned music and singing from a very young age from his own parents, who are well-known in Punjabi Music Industry. From a young age, he aspired to become an accomplished singer and secured second place in Amul Star Voice of India Chote Ustad season 2. Rishab gained fame and won million hearts across the country by his performance in The Voice India. From where, he went on to become a strong contestant on Indian Idol season 11. With his charismatic voice and charming personality, Rishabh received a lot of accolades from the judges and love from his fans. He has also appeared in many other television reality shows. His debut track was ‘O Soniye’ was launched on T-series. He has successfully released more single tracks like Kokka, Bomb and Teri Photo ft Manj Musik. Now he is ready to set the dance floor on fire, with his next Bhangra track “Kangna” with Vinay Singh of TopShotLife.

Vinay Singh, an emerging name in the music industry, is a passion-preneur who turned his love of music, art and entertainment into a platform for promising new talents on a global level. Vinay Singh established TopShotLife with the mission to recognize and sign promising new talents and provide them with the resources and collaborations in the music industry to help release their music. In just a few months, Vinay Singh is proving true to his vision of helping up-and-coming artists to develop and to achieve the fame they deserve. Vinay Singh's workmanship as a Label producer became evident after the success of his music videos. Vinay Singh has delivered successful hits one after the other with ‘Nightmare- by Vamsi Kalakuntla’, ‘Cute Smile- by Nitin Kumar’ and ‘Instagram Model 2.0- by Vamsi Kalakuntla’. Vinay Singh is continuously signing with new talented artists from India and USA to bring diverse and quality music for the masses. Vinay is very thrilled about his next release with Rishab Chaturvedi, “Rishabh caught my attention during his incredible performances in Indian Idol. Talentissm, our talent partner from India, helped us to collaborate with Rishabh for the song Kangna. Also, we collaborated with a trusted name in the industry Mr. Praveen Bhat for music video direction. Our past releases have been fan favorites globally and as an avid Punjabi Bhangra music lover I am excited about this next release Kangna, which is set to release on September 11th, 2020.”

When asked about the future projects, Vinay briefly described “We have signed a bunch of known promising artists and fresh talents. To name a few- Salman Ali, Udit Sehgal, Aditya Bhadoria and Aditya Jha. With every project, we strive to deliver higher quality and promise to keep entertaining our fans.” Vinay Singh and his core team – Neha Tandon (Creative Director- PR & Marketing) and Manish Shirsikar (VP- Sales & Operations), work non-stop to ensure artist development and global success with the strategic planning and diligence. Vinay and his team are redefining the record label ideology and raising the bar for new talents in the music industry.