The protesters blocked a major road at Sujapur in Malda district, torched several vehicles including a police van, ransacked government buses and set fire to tyres. When police tried to control the situation, they hurled stones and crude bombs. 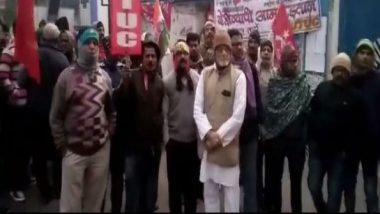 Kolkata, January 8: The 24-hour nationwide strike by central trade unions in West Bengal on Wednesday was marked by incidents of violence and arson, blocking of railway tracks and roads by protestors trying to enforce the shut down, officials said.

The protesters blocked a major road at Sujapur in Malda district, torched several vehicles including a police van, ransacked government buses and set fire to tyres. When police tried to control the situation, they hurled stones and crude bombs. Bharat Bandh: Uttar Pradesh on High Alert in View of All-India Strike Called by Trade Unions.

This led the police to baton-charged the mob, burst teargas shells and fire rubber bullets, they said. Railway tracks and roads were blocked in various parts of the state affecting normal life. West Bengal Chief Minister Mamata Banerjee, who had opposed the strike call, blamed the central trade unions, the Left Front and the Congress for the violence.

The CPI(M) and Congress was quick to return fire and accused Banerjee of instigating violence. They claimed that TMC cadres and police personnel had indulged in violence in the state. Both the parties pointed to a unverified video clip, that went viral, showing persons wearing police uniforms vandalizing buses.

Malda police superintendent Alok Rajoria said the district police has received the video clip and investigation is on. "If at all any police personnel is found to be involved, then necessary action will be taken," he assured. Besides Malda, violence and arson was reported in other districts of the state.

In East Midnapore stones were hurled at buses and protesters clashed with the police, who made several arrests, officials said. The protesters burnt tyres and blocked roads in various areas of East Burdwan district, besides blocking railway tracks affecting train services.

Several buses were also vandalised in Cooch Behar district by the protesters.

In the city, where the usual hustle and bustle was less than in other days, the bandh supporters tried to break past barricades in Central Avenue provoking police to use force. Several strikers were held, the police said. Bharat Bandh: Trade Unions, Protesters Block Railway Tracks in West Bengal's Howrah and Kanchrapara, Bus Services Affected in Odisha.

Members of Jadavpur University students' union, which has been protesting against the Citizenship Amendment Act, also joined the strikers and staged demonstration near their campus. Crude bombs were found on several roads in Barasat area of the North 24 Parganas district and on railway tracks at some places in the district, they said.

The strikers took out rallies in the industrial belt of the district, including in Barrackpore and Sodepur, and blocked roads and railway tracks. Daily commuters and office-goers across the state had a harrowing time as there were reduced number of vehicles plying on the roads. At least 175 local trains were cancelled in the busy Sealdah and Howrah divisions of Eastern Railway owing to the blockades.

In Kolkata, government buses plied normally but the number of private buses was fewer. Metro services were normal and auto-rickshaws and taxis were also seen on the roads. Heavy police deployment was seen in several areas and important crossings, including in Tollygunge, Behala, Esplanade, Park Circus and Shyambazar.

The violence across the state kicked off a war of words between political parties. Slamming the Left and the Congress for trying to enforce the bandh, Banerjee said that those who do not have any political existence in the state are trying to ruin its economy by pursuing "cheap politics" of strikes. CPI(M) Politburo member Mohammed Salim on the other hand claimed TMC cadres and police personnel had indulged in violence, specially in Malda district, after being instigated by Banerjee herself.

Salim's view was echoed by Adhir Ranjan Chowdhury, Congess leader in Lok Sabha, who too blamed Banerjee for inciting violence during the strike. TMC secretary general Partha Chatterjee said the video footage cited by Salim if found to be true is condemnable but added that he was sure that the CPI(M) and the Congress were indulged in falsehood to hide their sins.

West Bengal BJP president Dilip Ghosh said the "culture of strike and shutdown" have been rejected by the people of the state. Senior CITU leader Shyamal Chakraborty claimed that the strike was a "complete success" in West Bengal. A Kolkata Police official said that till 7 pm around 90 people were arrested from different parts of the city for allegedly trying to stall vehicles, government buses or forcibly stop shopkeepers from opening their establishments.

Flight services were normal at Netaji Subhash Chandra Bose International Airport but train services were partially affected. Branches and ATMs of most of the banks in the state remained closed as employees stayed away. Staff of the Reserve Bank of India also joined the strike. According to the All India Bank Employees Association (AIBEA) about 28 lakh cheques worth over Rs 21,000 crore could not be sent for clearing.

The All India Reserve Bank Employees Association (AIRBEA) general secretary Samir Ghosh said the strike was successful. Majority of the jute mills in the state also remained shut. Life at Bengal's IT hub at Sector V in the city was near normal, although there was partial impact in attendance in the early hours due to disruptions in transport, NASSCOM sources said. The state government offices recorded around 95 attendance, a senior official claimed.

The TMC government in West Bengal had announced that its employees would be barred from availing casual leave or half day leave on Wednesday. The Tea industry in Darjeeling hills in North Bengal, however, remained unaffected by the strike. The strike has been called by trade unions INTUC, AITUC, HMS, CITU, AIUTUC, TUCC, SEWA, AICCTU, LPF, UTUC, along with various sectoral independent federations and associations. Their demands include a minimum pension of Rs 6,000 for everyone, minimum support price (MSP) for farmers and adequate supply of ration to people.