Gopal Rai said that the War Room will be equipped with high-end technology to monitor real-time pollution data, hotspot conditions, and NASA-ISRO images of stubble burning. 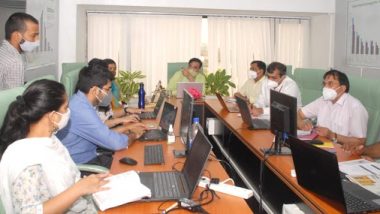 New Delhi, October 8: In a bid to control the rising levels of air pollution in the national capital due to stubble burning in neighboring states, Delhi Environment Minister Gopal Rai on Thursday launched a ‘war room’ to monitor efforts to contain pollution, fumes, and dust levels in hotspots. Gopal Rai said that the War Room will be equipped with high-end technology to monitor real-time pollution data, hotspot conditions, and NASA-ISRO images of stubble burning. He also said that a 10-member expert team will operate from the war room under senior scientists Dr. Mohan George and Dr. B L Chawla. Rai said that the Delhi government has set up the war room following CM Arvind Kejriwal's launch of "Yuddh Pradushan Ke Virudh".

Gopal Rai said, "To combat the air pollution in Delhi, Chief Minister Arvind Kejriwal on Monday launched "Yuddh Pradushan Ke Virudh" to reduce air pollution levels in Delhi. This fight will not be possible without the support of every agency, and therefore, we have set up and launched a centralized war room today in the Delhi secretariat. The war room is fully equipped with technology to monitor real-time pollution data. 'Green War Room' Started in Delhi Secretariat to Monitor Pollution of National Capital.

Three large LCD screens are present across the room. Real-time pollution data which includes air quality and data of PM 2.5 and PM 10, Sulfur Oxide, Nitrogen Oxide, Ozone, and wind speed will be displayed will be shared in one of the screens. Through another screen, we will monitor the situation of 13 hotspots. Through a third screen, we will monitor NASA and ISRO pictures on the stubble burning at the neighbouring states."

At the time of the launch, senior officials of the environment department and the Delhi Pollution Control Committee were present.  Rai enquired about the situation of the air pollution of Delhi and also asked the officials to explain the prediction. Answering the queries of the minister, the senior officials explained that the air quality of Delhi right now is around 'poor'. The officials also explained that the air quality of Delhi will worsen and the PM 2.5 will increase with the increase in the stubble burning in Punjab and Haryana.

Chief Minister Arvind Kejriwal on Monday announced a mega anti-pollution campaign "Yuddh Pradushan Ke Virudh" to reduce air pollution levels in Delhi, which will be a breather for Delhiites in the upcoming winter season. Talking about the war room CM Arvind Kejriwal had said, "A war room will be made which will track each of the activities taken and a daily report will be sent to me. We will monitor the effectiveness of these steps. A new tree transplant policy will also be announced. The government has already announced an electric vehicle policy that will also help in these measures."