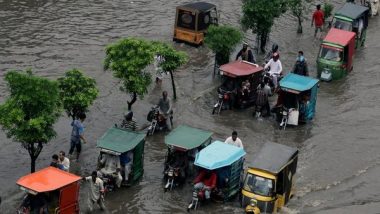 The monsoon has remained active over the country for the past week. According to the Met department, the monsoon trough will remain to the south of its normal position till the end of this week.

Furthermore, the above systems are expected to produce very heavy rainfall (≧115mm/day) in some areas of Madhya Pradesh, Gujarat state, Konkan, Goa and Madhya Maharashtra on Thursday and West Rajasthan and Gujarat region on Friday.

Meanwhile, another low-pressure area over Saurashtra and the adjoining regions will likely become more marked through Friday while moving westwards away from the Indian coast.

The rainfall activities will probably subside slightly on Friday. But a fresh cyclonic circulation will develop over the western Bay of Bengal and move westward on Saturday, leading to renewed rainfall activity from Saturday onward from Odisha and the adjoining areas. Very heavy rainfall (≧115mm/day) is possible over Odisha from Saturday to Monday.

(The above story first appeared on LatestLY on Aug 11, 2022 10:59 AM IST. For more news and updates on politics, world, sports, entertainment and lifestyle, log on to our website latestly.com).