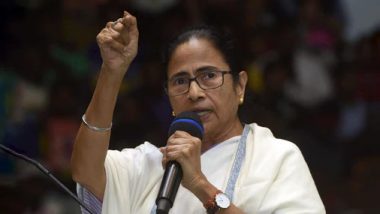 Nandigram, January 18: West Bengal Chief Minister Mamata Banerjee kicked off the Trinamool Congress's campaign for the assembly elections on Monday, announcing that she will contest the polls from Nandigram -- a political gambit aimed at the BJP's Suvendu Adhikari who won the seat in 2016 as a TMC candidate, while also retroceding to the land movement that catapulted her to power.

Addressing a rally here, Banerjee said she is not worried about those jumping to other parties as when TMC was formed none of them were there, in a reference to the party leaders, including Adhikari, who have joined the BJP.

Banerjee said these leaders left the party to protect the money "they have looted" in the last few years. Assembly Elections 2021: West Bengal, Kerala, Tamil Nadu to Go For Vidhan Sabha Polls Next Year; Here's When Voting is Expected.

Bakshi, who was on the podium, swiftly accepted the request. The agitation in Nandigram in the Purba Medinipur district over land acquisition in the late 2000s catapulted Banerjee to power in 2011, ending the 34 years of Left rule. However, Adhikari after switching over to the BJP has been alleging that the chief minister has forgotten the people of the area that helped her get to the top post.

Banerjee said she would never allow "some people" to sell out Bengal to the BJP.

"Those who have left the part, have my best wishes. Let them become president and vice president of the country. But don't you dare to sell out Bengal to the BJP. As long as I am alive, I won't allow them to sell out my state to the BJP," she said. The assembly elections in the state are likely in April-May.