Farmers' Tractor Rally: Deep Sidhu, Who Was Part of Group That Hoisted Religious Flag From Ramparts of Red Fort in Delhi, is Affiliated With BJP, Allege Congress And AAP (Watch Video) 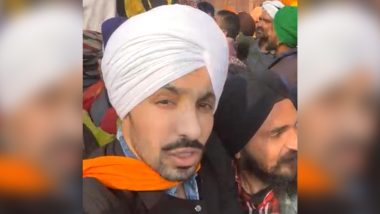 New Delhi, January 26: Congress and the Aam Aadmi Party (AAP) on Tuesday alleged that Deep Siidhu, who was part of the group that hoisted  religious flag "Nishan Sahib" at the ramparts of the Red Fort, is affiliated to the Bharatiya Janata Party (BJP). The religious and farmers' flag were hoisted on the Red Fort alongside the Tricolour.

Notably, "Nishan Sahib" a symbol of Sikh religion seen at all Gurdwara complexes. In one of the old pictures, which is going viral now, Deep Sidhu could be seen with Prime Minister Narendra Modi and Gurdaspur MP Sunny Deol. Farmers' Tractor Rally on January 26 Updates: Protestors Break Barricades at Peeragarhi Chowk, Move Towards Punjab Bagh; Here's What We Know So Far.

Video of religious Flag Being Hoisted From Ramparts of Red Fort:

Gaurav Pandhi, the National coordination of the Congress, in a tweet said, "Turns out, BJP's Deep Sidhu & his followers were the ones who tried to siege Red Fort & hoisted Nishan Sahib.This is BJP's sinister plan. I had sounded alert on him 2 months ago." Pandhi also shared the old picture of Sidhu with the Prime Minister.

Turns out, BJP's Deep Sidhu & his followers were the ones who tried to siege Red Fort & hoisted Nishan Sahib.

This is BJP's sinister plan. I had sounded alert on him 2 months ago (check tweet below)

AAP spokesperson, Harjot Singh Bains tweeted, "Miscreants like Deep Sidhu has harmed this pious movement of peasantry. Farmer Organisations have already discarded him and many have raised suspicions on his being an agent of agencies." Republic Day 2021: How to Dispose of the National Flag of India Respectfully? Follow These Rules As per the Flag Code of India.

Miscreants like Deep Sidhu has harmed this pious movement of peasantry.

Farmer Organisations have already discarded him and many have raised suspicions on his being an agent of agencies.

In the evening, Sidhu issued clarification in a Facebook live video. He said that they had only hoisted the Nishan Sahib flag on the Red Fort while exercising their democratic right to protest. He added that, one person could be blamed for the people’s anger. Sidhu even said that nobody questioned the sovereignty of the country and they did not even touch the national flag.

Here is The Link of Deep Sidhu's Facebook Video:

Earlier, in the day, Deep Sidhu along with others hoisted Nishan Sahib and farmers' flag at the Red Fort. The 'Nishan Sahib' is a triangular flag that is sacred to Sikhs. The emblem on the flag comprises of 'Khanda', a two-edged sword, Chakra, a disc, and two Kirpans that cross each other at the handles. The other flag appeared to be of a farmer union.

A large number of protesters deviated from the designated route for the proposed tractor parade in the national capital and barged into the Red Fort. They were later removed by the police.

(The above story first appeared on LatestLY on Jan 26, 2021 06:19 PM IST. For more news and updates on politics, world, sports, entertainment and lifestyle, log on to our website latestly.com).