Delhi witnessed unprecedented scenes of chaos and violence on Tuesday, on the nation's 72nd Republic Day. As a result of which, security has been tightened at Red Fort area and Singhu Border on Wednesday. 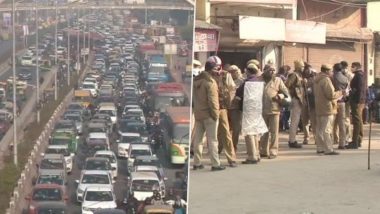 Delhi, January 27: Delhi witnessed unprecedented scenes of chaos and violence on Tuesday, on the nation's 72nd Republic Day. As a result of which, security has been tightened at Red Fort area and Singhu Border on Wednesday. More than 300 Police personnel have been injured after being attacked by agitating farmers on January 26. Additional DCP Central's operator was attacked with a sword at ITO on Tuesday, according to Delhi Police. In the wake of the violence, Delhi Police will hold a press briefing today at 2:30 pm.

Delhi Metro earlier in the day, informed that the entry and exit gates at few metro stations are closed. Traffic congestion in several parts of the national capital was also witnessed as several roads remained shut a day after Red Fort violence. Sunny Deol and Several Farmer Leaders Distance Themselves From Deep Sidhu For the Red Fort Violence.

On Tuesday, groups of farmers protesting the centre's agriculture laws clashed with police and security forces during what was supposed to be a peaceful tractor rally around the city's borders. Some climbed to the ramparts of the fort and unfurled flags yesterday. Farmers' Tractor Rally on January 26 Updates: Samyukt Kisan Morcha Calls Off Kisan Republic Day Parade With Immediate Effect; Here's What We Know So Far.

Delhi: Security heightened at Singhu border where farmers are protesting against #FarmLaws. pic.twitter.com/fd0VPGIjpO

15 FIRs have been registered in connection with the violence during farmers' tractor rally on Wednesday So far, 5 FIRs have been lodged in Eastern Range, according to Delhi Police.

Farmers protesting against the new farm laws started their tractor parade from three sites- Singhu, Tikri, and Ghazipur borders on Tuesday as the country celebrated the 72nd Republic Day. They entered the national capital by breaking the police barricades. This resulted in extreme chaos in the Delhi on Republic Day.

(The above story first appeared on LatestLY on Jan 27, 2021 10:57 AM IST. For more news and updates on politics, world, sports, entertainment and lifestyle, log on to our website latestly.com).