Reports claim that it was Mann's mother's wish to see her son settle down again. Accordingly, the girl has been chosen by his mother and sister. 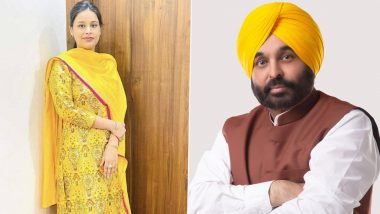 Mumbai, July 6: Punjab Chief Minister Bhagwant Mann is all set to tie the knot once again. The 48-year-old AAP leader will get married in a close private ceremony at his house in Chandigarh tomorrow with Dr Gurpreet Kaur.

According to sources, Delhi CM and AAP National convener Arvind Kejriwal will also attend the wedding. The wedding, which will be a private affair, will take place on July 7 in Chandigarh. Punjab CM Bhagwant Mann To Tie Knot With Dr Gurpreet Kaur Tomorrow in Chandigarh.

If reports are to be believed, the wedding will be attended by only close family members. It must be noted that this will be Mann's second marriage. Earlier, Mann was married to Inderjeet Kaur with whom he split up in 2015.

Kaur and her two children live in America. During his oath taking ceremony as Chief Minister of Punjab, Mann's both children were present.

Who is Dr Gurpreet Kaur?

According to reports, Dr Gurpreet Kaur is close to CM Bhagwant Mann’s family and the two have known each other for a long time. Reports claim that it was Mann's mother's wish to see her son settle down again. Accordingly, the girl has been chosen by his mother and sister.

Mann's to-be wife is a doctor by profession. The preparations for the wedding are underway and it is likely to take place at the Chief Minister's official residence.

As per reports, AAP's state president Raghav Chadha is responsible for the preparations for the wedding of CM Bhagwant Mann. CM Bhagwant Mann and Dr Gurpreet Kaur will get married according to Sikh customs. Sources also said that CM Mann himself is bearing the expenses of the wedding.

(The above story first appeared on LatestLY on Jul 06, 2022 03:09 PM IST. For more news and updates on politics, world, sports, entertainment and lifestyle, log on to our website latestly.com).