Year Ender 2021: From Rolling Out COVID-19 Vaccination Drive To Neeraj Chopra Winning Gold At Tokyo Olympics, Positive News That Made Headlines In India This Year

The Year 2021 is also marred by the COVID-9 pandemic. However, the year 2021 gave us hope to fight the pandemic. In this distressing time, the year also gave us moments to cheer. From rolling out of vaccination drive to the first gold medal for India in athletics in Olympics, here are top five positive news for Indian in 2021. 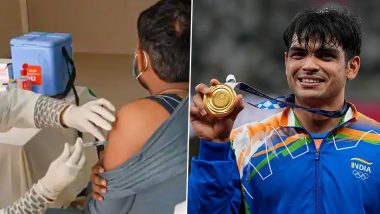 From rolling out of vaccination drive to the first gold medal for India in athletics in Olympics, here are top five positive news for Indian in 2021. (Photo Credits: PTI)

Mumbai, December 24: The Year 2021 is also marred by the COVID-9 pandemic. India witnessed the deadliest second COVD-19 wave this year, throwing life out of gear. However, the year 2021 gave us hope to fight the pandemic. The vaccination drive was rolled out in January in India. The country fought back hard in bringing life to normal after the second COVID-19 wave. In this distressing time, the year also gave us moments to cheer.

India's test win at Gabba against Australia in Cricket and Neeraj Chopra winning the first gold medal in athletics in Olympics for India are some of the positive news that brought a smile to the face of Indians amid tough times. A year-long farmers' protest also ended in December this year. As the year comes to an end, let us refresh our memories with positive news that made headlines in 2021. Year Ender 2021: From IAF Chopper Crash to Devastating COVID-19 Second Wave, Tragedies That Shook India This Year.

Rolling Out Vaccination Drive: The countrywide vaccination drive was rolled out on January 16, with healthcare workers (HCWs) getting inoculated in the first phase. The vaccination of frontline workers (FLWs) started on February 2. The next phase of COVID-19 vaccination commenced from March 1 for people over 60 years of age and those aged 45 and above with specified co-morbid conditions. The country launched vaccination for all people aged more than 45 years from April 1. The drive was then expanded as the government allowed everyone above 18 to be vaccinated from May 1.

India Winning Test Series in Australia: Team India created history at the Gabba as they handed Australia the first defeat at the venue since 1988. With the win, India also sealed the Border-Gavaskar trophy. Team India secured the series 2-1.

End Of Farmers Protest: A year-long farmers' protest ended in December this year after the government repealed the three farm laws. The Farm Laws Repeal Bill 2021 was passed by both the Houses of Parliament on November 29. Prime Minister Narendra Modi, in an address to the nation, had announced that the laws would be repealed. Various farmer groups protested against the laws for more than a year, and many farmers also lost their lives during the protests.

Appointment of People Of Indian Origin For Top Post in Global Companies: People of India Origin made to the top post of global companies in 2021. Parag Agarwal became the CEO of Twitter in November this year. Parag joined Twitter in 2021. He is an alumnus of the Indian Institute of Technology (IIT) Bombay. Rangarajan Raghuram was also named the CEO of VMWare in 2021. Rangarajan joined VMware in 2003 and is also an alumnus of IIT Bombay.

Apart from the above-mentioned, another positive news that made headlines in 2021 was the Centre agreeing to grant permanent commission to 11 woman officers in the Indian Army. In March this year, the top court, in a judgment, had invalidated certain terms in the evaluation criteria adopted by the Indian Army for grant of PC to women officers as "arbitrary and irrational". The top court had held that the evaluation criteria perpetuated gender stereotypes based on patriarchal notions and amounted to "systemic discrimination".

(The above story first appeared on LatestLY on Dec 24, 2021 04:43 PM IST. For more news and updates on politics, world, sports, entertainment and lifestyle, log on to our website latestly.com).