The year 2021 was battered by several tragedies that costed the numerous lives and damaged several properties. From recent IAF helicopter crash, floods in several states to the deadly second wave of coronavirus, here are some of the tragedies that India witnessed in 2021. 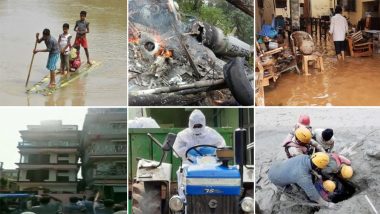 New Delhi, December 17: The ever-changing, moving, growing world came to a standstill, temporarily though, in 2020 with the outbreak of coronavirus pandemic and the subsequent intermittent lockdowns. By the end of 2020, as another decade completed, people were eagerly looking forward to 2021 with hopes for a revival of social, economic lives and of course vaccines, if not cure. Now with just two weeks for 2022, it won't be wrong to say that troubled 2021- though haunted with floods, landslides, earthquakes, cyclones, alpha, beta, gamma, delta, omicron- barreled trough all lives and crashed in the end.

The year drastically changed the life, living and livelihood of several Indians. The aerial view of scores of preys left burning unattended, PPE kit-clad people roaming around on streets, water flowing unabashedly through the streets and running down all homes, cars, humans, animals -alike- blocking its way, cracked and broken buildings, homes, and hope, will not be easy to erase from the minds and hearts of people for years to come. As the year comes to an end, here's looking at some tragedies that shook India in 2021.

IAF Mi-17 V5 Helicopter Crash: An IAF chopper carrying late CDS General Bipin Rawat, his wife Madhulika Rawat and 12 others crashed near Coonoor in Tamil Nadu’s Nilgiris district on December 8. All  14 people onboard lost their lives in the tragic accident. India lost its 14 of its brave hearts who had vowed to protect their motherland at all costs, even their lives. The visuals from the wreath lying and cremation of the passengers of the ill-fated chopper left each and every Indian tear-eyed.

Uttarakhand Glacier Burst: Another tragic incident that took several lives was the tragic glacier burst in Chamoli district on Uttarakhand on February 7 this year. The rescue operation continued for several months. According to reports, at least 83 dead bodies were recovered by May this year while hundreds of people were still reported missing. A glacier burst in the Tapovan-Reni area had led to massive flooding in Dhauliganga and Alaknanda rivers and damaged houses and the nearby Rishiganga power project.

Incessant Rainfall Prompted Tragedies: Several areas in the country witnessed hefty downpours results in floods, flash floods, and landslides causing massive damage to life and property. In Maharashtra, heavy rainfall in several areas including Chiplun, Khed, Sangli, Ratnagiri among others in July led to massive flooding and even landslides in some places. More than 200 people lost their lives in the rains-induced disaster in the state and several were reported missing.

Assam Earthquake: An earthquake of magnitude 6.4 jolted the state of Assam in April this year. On April 28, around 7:51 in the morning, Sonitpur, was rocked first by the strong tremor. Its nearby areas on both sides of Brahmaputra river in central Assam have experienced 21 aftershocks, leading to massive destruction of property.

Assam also faced severe floods in August this year. According to reports, officials said around 2.26 lakh people, including more than 39,000 children were affected in 15 of the 34 Assam districts, as per a report dated August 29, 2021. Several people were reported dead.

Second Wave Of COVID-19: Worst for the last! The second wave of coronavirus created unprecedented havoc in India. Shortage of oxygen cylinders, hospital beds, Remdesivir, doctors, insufficient medical infrastructure, administrative failures led to numerous deaths in the country, many of which -as per reports- have gone undocumented or unreported and rather ignored as over 4,00,000 new cases of infection were reported on a daily basis.

So far, the country has reported 4,76,869 deaths due to COVID-19, as per Union Health Ministry data released on Friday. On June 10, 2021, India recorded 6,148 fatalities owing to coronavirus - the highest daily death count due to the virus in the world. Not only the patients, doctors too lost their lives in large numbers during the second wave. As per IMA, 798 doctors died during the second wave of COVID-19 across the country by June end.

Apart from the above mentioned, the outgoing year was battered with several other tragedies which changed the lives of people across the country. Still, people eagerly look forward to 2022 with aspiration and determination to recover and revive their lives while adjusting to the new normal.

(The above story first appeared on LatestLY on Dec 17, 2021 02:19 PM IST. For more news and updates on politics, world, sports, entertainment and lifestyle, log on to our website latestly.com).