Haryana Chief Minister Manohar Lal Khattar on Sunday asserted that he would leave politics if the minimum support price (MSP) system is discontinued. 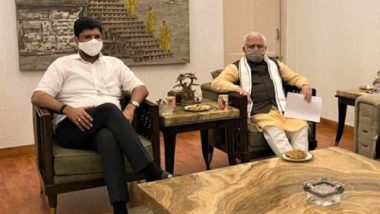 "MSP will always be there. If someone tries to abolish it, Manohar Lal Khattar will leave politics. MSP will not end," the Chief Minister asserted. "A handful of people, who are politically motivated, I won't call them as representatives of farmers, are opposing these laws due to political reasons," he added. He also spoke against road blockades by the protesting farmers. Farmers' Protest: Bang Utensils During PM Narendra Modi's Mann Ki Baat on December 27, Farmer Leaders Urge People.

Khattar said there are ways to protest, it can be on the floor of the assembly, through the media, by going amongst people etc., "but to put pressure by gathering 50,000, 70,000 people and blocking roads…democracy is not for such things". "There is no place for this in a democracy. If governments bend on this, then the country will go in wrong direction," he said.

Earlier, Khattar's deputy Dushyant Chautala repeatedly said that he would quit politics if MSP is removed. Thousands of farmers from Punjab, Haryana and other parts of the country have been protesting for the past over three weeks near various border points of Delhi against the farm laws, which the ruling Bharatiya Janata Party (BJP) has claimed are for farmers' benefit.

(The above story first appeared on LatestLY on Dec 20, 2020 11:03 PM IST. For more news and updates on politics, world, sports, entertainment and lifestyle, log on to our website latestly.com).