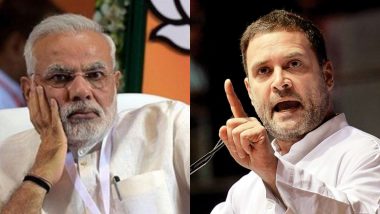 Hitting out at Central government, Rahul Gandhi took to Twitter and wrote, "With the anti-agriculture 'black law' of Modi government, farmers:

1. How will the MSP be received at the end of APMC / Kisan Market?

2. Why MSP not guaranteed?

Previously on Saturday, Gandhi had launched a scathing attack on the ruling dispensation over the three farm bills passed in the Lok Sabha. He had said that farmers have lost faith in the BJP government citing a difference in their (BJP government's) words and actions. He gave the examples of demonetisation, wrong GST and a heavy tax on diesel.

However, PM Modi assured the farmers that the government procurement of their produces will continue and so will the minimum support price (MSP). The Premier alleged that Congress, which ruled the country for decades, is 'deceiving and misleading' farmers by spreading misleading and 'lying' to them.

Meanwhile, CPI(M)'s KK Ragesh, TMC's Derek O'Brien and DMK's T Siva moved an amendment to send the two farms Bills to a Select Committee of the Rajya Sabha. Also, farmers have blocked NH-71 in Jind's Julana to protest against the three farm bills. Some farmer groups have also burnt copies of the bills.

(The above story first appeared on LatestLY on Sep 20, 2020 01:17 PM IST. For more news and updates on politics, world, sports, entertainment and lifestyle, log on to our website latestly.com).