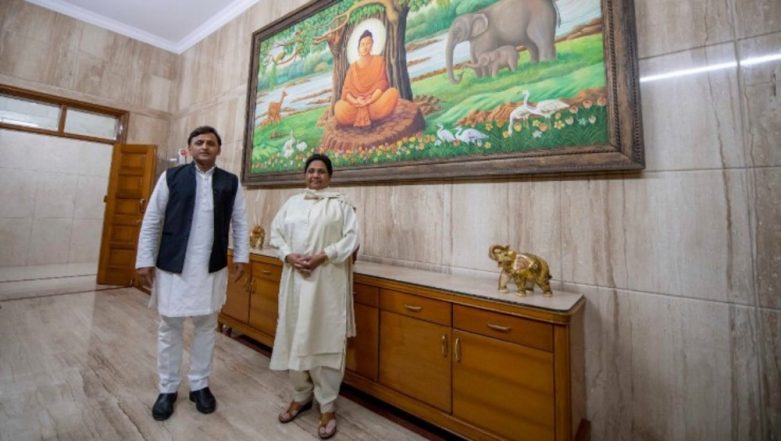 Lucknow, May 20: After the two-months-long elections ended and exit polls predicted gain for the grand alliance, Samajwadi Party president Akhilesh Yadav on Monday met his allaince partner Bahujan Samaj Party supremo Mayawati at her residence in Lucknow. After the meeting which went on for about an hour, Yadav posted a picture of the meeting on his official Twitter handle with a caption “Now, getting ready for the next step.” Uttar Pradesh Exit Poll Results For Lok Sabha Elections 2019.

According to reports, both the leaders discussed and evaluated their candidates' performance in the 2019 Lok Sabha elections. According to poll surveys by multiple news agencies, BJP is taking a lead in the state with victory in 51-52 constituencies. The SP-BSP-RLD combine can get 26-17 seats, whereas, the Indian National Congress would be restricted to only two Lok Sabha seats.

"We will talk after the results on May 23. I maintain my stand that we are winning 56 seats in UP," Akhilesh Yadav told media after his meeting. Some reports also state that both the leaders decided that they would hold talks with other opposition parties, excluding Congress, a day after the general elections results, May 24. Rahul Gandhi Says, 'Akhilesh Yadav and Mayawati's Controller in Hands of PM Narendra Modi'.

"They will have telephonic talks with West Bengal Chief Minister Mamta Banerjee and Nationalist Congress Party (NCP) Chief Sharad Pawar on May 23 and with other leaders, including those of the Congress on May 24," news agency IANS quoted a source as saying.

In 2014 elections in Uttar Pradesh, BJP and its ally Apna Dal had won 73 of the 80 seats in the state, and Congress two. The Samajwadi Party won five seats, while BSP failed to attract votes. This year, two parties, arch-rival for 24 years, had joined hands in an attempt to limit the ruling party.