Amar Singh Dies at 64: Here's a Look at The Political Career of Rajya Sabha MP And Former Samajwadi Party Leader 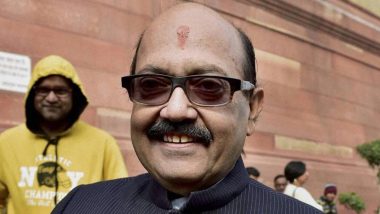 Singh was born on January 27, 1956, in Uttar Pradesh. Amas Singh was first elected to Rajya Sabha in November 1996. In 1998-99 and from October 2004 onwards, he was a member of Consultative Committee for the Ministry of Finance.

Amar Singh was elected to Rajya Sabha four times in 1996, 2002, 2008 and 2016. He also served as a member of several parliamentary committees. The former Samajwadi leader rose to prominence at national level politics when he supported the United Progressive Alliance (UPA) in 2008 after the Communist Party of India withdrew their support over the proposed Nuclear Accord with the United States.

On January 6, 2010, he resigned from all the posts of Samajwadi Party and a month later he along with Jaya Prada was expelled from the party by the then chief Mulayam Singh. The former Samajwadi Party veteran floated his own political party, Rashtriya Lok Manch, in 2011. He fielded candidates in 360 of the 403 seats in Uttar Pradesh in the 2012 assembly elections. However, his party did not win even a single seat.

Later in March 2014, he joined the Rashtriya Lok Dal party and contested the general elections that year from Fatehpur Sikri, Uttar Pradesh in the same year. Singh lost those elections.

The former Samajwadi Party leader was also involved in several controversies during his political tenure. Amar Singh has been chargesheeted for offering bribes to three parliament members of the Bharatiya Janata Party in 2008 under the Prevention of Corruption Act by the Delhi Police on August 24, 2011. However, no concrete evidence was found against him.

(The above story first appeared on LatestLY on Aug 01, 2020 05:43 PM IST. For more news and updates on politics, world, sports, entertainment and lifestyle, log on to our website latestly.com).