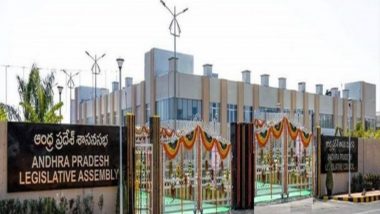 Amravati, July 31: Andhra Pradesh Governor Biswabhusan Harichandan on Friday approved the Bill designating Visakhapatnam, Kurnool and Amravati as the three state capitals. The legislation was passed by the Assembly twice this year, in January and June. Since the Legislative Council was abolished, it only required the Governor's consent to be enacted as a law.

The Raj Bhawan, in a statement issued today, confirmed that Bill has been approved by the Governor. Amravati, from now, would be officially recognised as the legislative capital of Andhra Pradesh. Visakhapatnam is designated as the administrative capital, whereas, Kurnool will be the legal capital. Andhra Pradesh Shocker: Nine Dead After Allegedly Consuming Sanitizer in Prakasam District.

The challenge of finding a new capital sprung up before Andhra Pradesh after the state was bifurcated in 2014. Hyderabad, the erstwhile capital, was allotted to the newly carved state of Telangana.

The then government led by Chandrababu Naidu decided to develop Amravati as the new capital, while using the administrative and legislative set-up in Hyderabad till the development work is completed.

After Naidu was voted out of power and Jaganmohan Reddy-led YSRCP won a full-majority mandate in 2019, it was decided to designate three capitals in the state in a bid to decentralise power. To bring this into effect, the government had passed the CRDA and Decentralization of Development earlier this year.

(The above story first appeared on LatestLY on Jul 31, 2020 05:06 PM IST. For more news and updates on politics, world, sports, entertainment and lifestyle, log on to our website latestly.com).