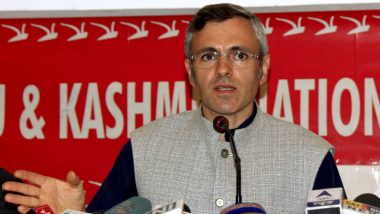 "BJP displaying its hypocrisy. They can gather & celebrate. The rest of us can’t even meet to discuss what’s happening in J&K," Omar tweeted. He also shared pictures of BJP workers celebrating abrogation of Article 370 in Srinagar. Notably, authorities have announced the imposition of curfew in Srinagar district till this midnight. Farooq, Omar Abdullah Move Jammu and Kashmir High Court for Release of 16 NC Leaders Detained Since August 5, 2019.

BJP displaying its hypocrisy. They can gather & celebrate. The rest of us can’t even meet to discuss what’s happening in J&K. https://t.co/M3aj4glqax

Today marks the first anniversary of the abrogation of Articles 370 and 35A which granted special status to the erstwhile state of Jammu and Kashmir, paving the way for the bifurcation of the state into two Union Territories of Jammu and Kashmir and Ladakh. Omar, along with several politicians, was detained and placed under house arrest. He was released from detention in March.

(The above story first appeared on LatestLY on Aug 05, 2020 01:28 PM IST. For more news and updates on politics, world, sports, entertainment and lifestyle, log on to our website latestly.com).