According to a senior official, the Chief Minister has directed the departments concerned to hasten the pending works. 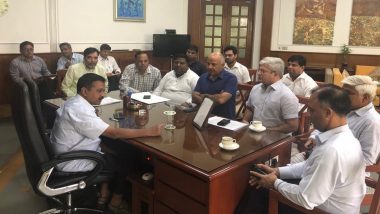 New Delhi, May 27: A day after the model code of conduct was lifted, Delhi Chief Minister Arvind Kejriwal on Monday called a meeting of his cabinet and senior government officials and asked them to speed up ongoing development works in the city. This was his first cabinet meeting after the Lok Sabha elections.

According to a senior official, the Chief Minister has directed the departments concerned to hasten the pending works. "The Chief Minister wants that the ongoing development projects in the city should be completed by next few months," the official told IANS on the condition of anonymity. Arvind Kejriwal vs Rahul Gandhi Erupts on Twitter as AAP-Congress Alliance Bid Hits Roadblock.

(The above story first appeared on LatestLY on May 27, 2019 05:14 PM IST. For more news and updates on politics, world, sports, entertainment and lifestyle, log on to our website latestly.com).