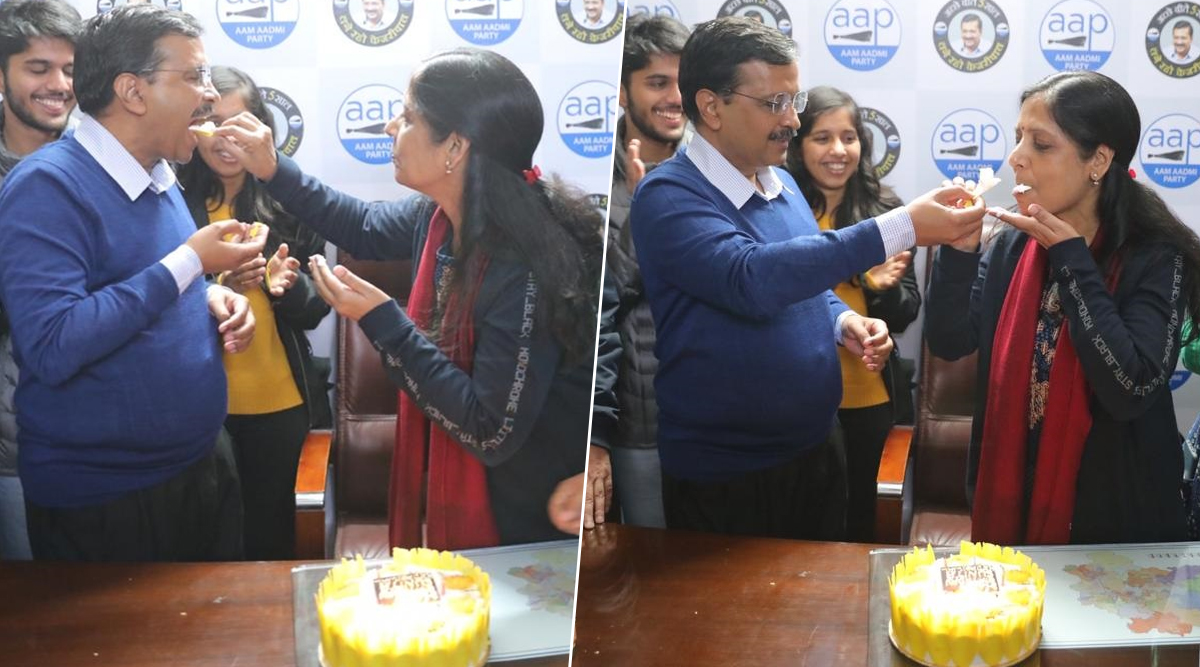 New Delhi, February 11:  As counting of votes for Delhi assembly elections 2020 proceeded at a steady pace, suggesting the return of the Aam Aadmi Party (AAP) to power, Delhi Chief Minister and AAP Chief Arvind Kejriwal was seen celebrating ahead of its impending victory in polls, with his wife Sunita. According to a tweet by ANI, the Delhi Chief Minister was seen cutting a cake and celebrating as AAP took big lead on the counting day today. The day is also special for Kejriwal as its his wife Sunita's birthday today. Delhi Assembly Elections Results 2020: Three Reasons Why Arvind Kejriwal's AAP Won Despite BJP Resurgence.

As the party took leads in several constituencies, the party's workers and volunteers thronged the party headquarters to felicitate Arvind Kejriwal. Earlier today, AAP tweeted a photo of a kid dressed as Delhi Chief Minister Arvind Kejriwal, sporting his trademark muffler and cap. The  photograph shows the toddler dressed as Kejriwal, with an AAP cap and a muffler. The post has garnered more than 11.8K likes and 1.7K comments on Twitter. Delhi Assembly Elections Live Updates.

The victory of the ruling AAP victory in Delhi Assembly polls is the result of the worsolid and visible development works carried out at the ground level for the people of the national capital, the ruling Maha Vikas Aghadi allies in Maharashtra said here on Tuesday.