Assam Assembly Elections 2021: Key Electoral Battles to Watch Out For in Phase 1 Polls

The first phase of polling for assembly elections in Assam will take place on March 27. We list key electoral battles to watch out for. 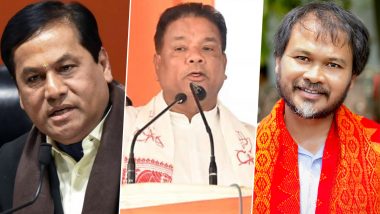 Guwahati, March 24: The first phase of polling for assembly elections in Assam will take place on March 27. The prime electoral contest is between a colaition, led by the Bharatiya Janata Party (BJP) and Mahajot, an alliance of regional and Left parties, headed by the Congress. Several prominent leaders, including Chief Minister Sarbananda Sonowal, are in the fray in the first phase of polls in Assam. We list key electoral battles to watch out for. Assam Assembly Election Results From 1952 to 2016: Parties That Won Polls in The Northeastern State And Chief Ministers Over The Years.

An interesting battle will be seen in Jorhat assembly constituency where Assam Assembly Speaker Hitendra Nath Goswami is contesting against Congress's two-time legislator Rana Goswami. It’s going to be Goswami versus Goswami for the fourth consecutive terms. While Rana was elected twice in 2006 and 2011 from Jorhar, Hitendra Nath bagged the seat in 2016. Assam Assembly Elections 2021 Dates: Polling in 3 Phases on March 27, April 1 And April 6, Results on May 2; Check Full Schedule.

Assam Agriculture Minister and Asom Gana Parishad chief Atul Bora is challenged by independent candidates in Bokahat assembly constituency. Independent candidates Jiten Gogoi, who had won the seat twice, Jibon Borah, who is supported by Akhil Gogoi-led Raijor Dal, and activist Pranab Doley are set to give a tough fight to Bora.

In Gohpur, BJP's Utpal Borah is the sitting legislator. Congress has nominated its state chief Ripun Bora from Gohpur.

An interesting battles will be on display in Sibsagar assembly constituency where jailed peasant leader Akhil Gogoi is contesting. Congress has nominated Youth Congress leader Subhamitra Gogoi, while the BJP is banking on Surabhi Rajkonwar to win the seat.

Polling for second and third phase of elections will be held on April 1 and 6 respectively. The results of assembly elections in Assam will be declared on May 2.

(The above story first appeared on LatestLY on Mar 24, 2021 02:48 PM IST. For more news and updates on politics, world, sports, entertainment and lifestyle, log on to our website latestly.com).