Bhagwant Mann Set to be Punjab CM; From Comedian ‘Jugnu’ to Punjab’s Next Chief Minister, Here is The Journey of the AAP Leader

With the Aam Aadmi Party sweeping the Punjab Assembly Elections 2022, Bhagwant Mann is set to be the chief minister of the state. Mann won his seat Dhuri with a margin of over 45000 votes. The party is on the cusp of history leaving behind heavyweights of Punjab like the Congress and the Akalis. 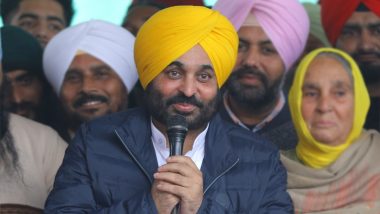 With the Aam Aadmi Party sweeping the Punjab Assembly Elections 2022, Bhagwant Mann is set to be the chief minister of the state. Mann won his seat Dhuri with a margin of over 45000 votes. The party is on the cusp of history leaving behind heavyweights of Punjab like the Congress and the Shiromani Akali Dal.

In the last Punjab Assembly Elections held in 2017, the Aam Aadmi Party went into the polls without declaring a chief ministerial candidate but failed to form a government. This time it didn’t take those risks and had named the Sangrur MP as the CM face.

The party named him as the chief ministerial face after more than 93 percent of respondents voted for him in a phone line survey.   Punjab Assembly Election Results 2022 Live Updates: AAP Maintains Huge Lead Over Congress, Bhagwant Mann Wins Dhuri by Over 45,000 Votes

The 48-year-old politician, Bhagwant Mann, was born on October 17, 1973, in Sartoj village in Sangrur.

Prior to his tryst with politics, Mann was already a popular face in Punjab. His Punjabi comedy show "Jugnu Kehnda hai" and "Jugnu Hazir hai" among others had become popular and people started to recognise him as “Jugnu.” Known for his sense of humour and use of satire to drive his point home on the television show 'The Great Indian Laughter Challenge', his audio cassettes such as "Kulfi Garma Garam", filled with political satire, evoked giggles.

Born on 17 October, 1973 in Sangrur district’s Satoj village, Mann is a well-known Punjabi comedian and actor with a reasonably clean image, and is seen as 'outside the political elite', which has become increasingly popular.

Mann had contested on an AAP ticket in the general elections in 2014, and had gone on to become a Lok Sabha MP.

Considering the damage his drinking habits was inflicting on his image, in 2019, Mann vowed not to drink anymore and claimed to have become a teetotaler.

Mann had also stirred up a row when he filmed the security pickets on Parliament premises. Later, he defended himself claiming that the purpose of the video was to showcase how Parliament functions.

In an interview in 2021, Mann had informed that he and his wife Inderpreet Kaur had separated in 2015, after being estranged for a while.

Moreover, Mann is also AAP's most prominent face in the state, without any significant competitors. He has stayed in the party despite some big names who had joined aap in the initial stages leaving the ship.

(The above story first appeared on LatestLY on Mar 10, 2022 05:07 PM IST. For more news and updates on politics, world, sports, entertainment and lifestyle, log on to our website latestly.com).