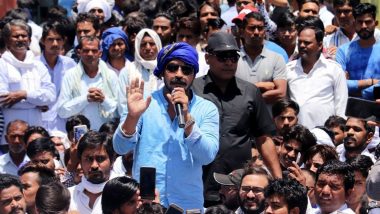 "Our candidate in Bulandshahr has left opposition parties terrified...Due to this, in a cowardly manner, my convoy was shot at. This shows their hopelessness. They want to disturb the atmosphere, but we will not let it happen," Aazad tweeted in Hindi. Azad Samaj Party has fielded Bhim Army member Haji Yamin, who joined the party last month, from Bulandshahr Sadar assembly seat. Voting for a by-election to Bulandshahr assembly seat will be held on November 3. Bihar Assembly Elections 2020: Pappu Yadav, Chandrashekhar Azad Ravan Form Progressive Democratic Alliance to Contest Polls.

The bypoll is being held due to the death of BJP's Virendra Singh Sirohi. The BJP has nominated Usha Sirohi, wife of the late minister for this seat. Akhilesh Yadav's Samajwadi Party did not field its candidate and has left the seat for its ally Rashtriya Lok Dal. RLD fielded Praveen Singh from this seat, while Mayawati's Bahujan Samaj Party gave the ticket to Mohammad Yunus and Congress fielded Sushil Chaudhary from this seat.

(The above story first appeared on LatestLY on Oct 25, 2020 09:18 PM IST. For more news and updates on politics, world, sports, entertainment and lifestyle, log on to our website latestly.com).