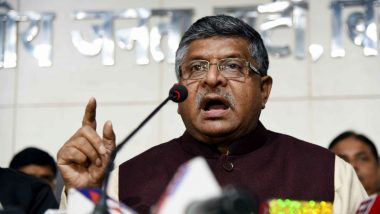 Patna, September 14: The Bharatiya Janata Party (BJP) sounded poll bugle for Bihar Assembly Elections 2020. Union Minister Ravi Shankar Prasad on Monday said that the Bihar would become Atma Nirbhar after the BJP come to power in the state. He added that everyone in Bihar wants to become self-dependent. Ravi Shankar Prasad also shared a campaign song ahead of the assembly election in Bihar. Bihar Assembly Elections 2020: Election Commission of India Officials to Visit Patna Today to Overview Poll Developments.

In the video shared by the Union Minister, the BJP promised to bring prosperity in the state. The video shows a picture of a developed Bihar under the BJP rule, where women will be given equal opportunities, every household will get LPG cylinder, and modern infrastructure will be built in the state. Bihar Assembly Elections 2020: AIMIM General Secretary Aftab Ahmad Siddiqui Resigns, Joins Congress.

On Saturday, Union Minister of State (MoS) Home Affairs, Nityanand Rai said that the National Democratic Alliance (NDA) under incumbent Chief Minister Nitish Kumar would retain power in Bihar by winning 220 seats in the upcoming Assembly elections Bihar Assembly elections for 243 seats are due in October-November.

The tenure of the current Assembly is scheduled to end on November 29. The Election Commission has not yet taken a final call on poll dates in Bihar due to the coronavirus pandemic. Meanwhile, on Monday, a two-member team of Election Commission held meeting at Muzaffarpur to review preparedness for the upcoming assembly elections. The Commission will also hold a meeting with DMs and SPs of different districts at Patna, Bhagalpur and Bodh Gaya during the two-day visit.

(The above story first appeared on LatestLY on Sep 14, 2020 06:56 PM IST. For more news and updates on politics, world, sports, entertainment and lifestyle, log on to our website latestly.com).