Amid the good show by the Bharatiya Janata Party (BJP), Chief Minister Nitish Kumar-led National Democratic Alliance (NDA) is set to return to power with 125 seats. While the NDA will now work on government formation, here is what might have worked for the NDA against the Mahagathbandhan. 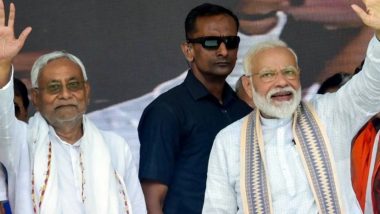 Patna, November 11: Amid the good show by the Bharatiya Janata Party (BJP), Chief Minister Nitish Kumar-led National Democratic Alliance (NDA) is set to return to power with 125 seats. According to the Election Commission of India (ECI), BJP emerged as the senior partner in the alliance with 74 seats of the 110 seats it contested and the Janata Dal (United) bagged 43 seats out of 115 assembly seats it fought. NDA Gets Absolute Majority With 125 Seats, Mahagathbandhan Settles With 110 Seats.

In the closely fought election, Tejashwi Yadav-led Rashtriya Janata Dal (RJD) emerged as the single largest party with 75 seats in the 243-member assembly. However, its wider alliance, the Mahagatbandhan or Grand Alliance, failed to cross the majority mark with Congress winning only 19 seats of the 70 it contested. The Left parties came out strong with winning 16 seats. The alliance won 110 seats. Bihar Assembly Election Results 2020: What Happens After A Party Wins Vidhan Sabha Polls? How Is A Government Formed?

While the NDA will now work on government formation, here is what might have worked for the NDA against the Mahagathbandhan.

The popularity of Prime Minister Narendra Modi was not only successful in getting his party re-elected but also improving its performance. The premier held 12 election rallies in the eastern state targeting opposition as "Jungle Raj" and asking electors to vote for NDA.

This step was taken to ensure that Paswan's exit was not seen as anti-Dalit move. Both Manjhi and Sahani come from the same Dalit community. Both the parties have performed well and secured four seats each.

The women voters are the backbone of Nitish Kumar’s support base. The JDU chief in his last election rally in Purnea district said, “This is my last election…aant bhala to sab bhala." Kumar in the past 15 years tried to convert women into separate vote bank in Bihar.

PM Modi also noted the same and lauded women for voting NDA. "Bihar has taught the world the first lesson of democracy. Today Bihar has told the world again how democracy is strengthened. A record number of poor, deprived and women of Bihar also voted and today have also given their decisive decision for development," PM Modi tweeted in Hindi.

(The above story first appeared on LatestLY on Nov 11, 2020 09:49 AM IST. For more news and updates on politics, world, sports, entertainment and lifestyle, log on to our website latestly.com).