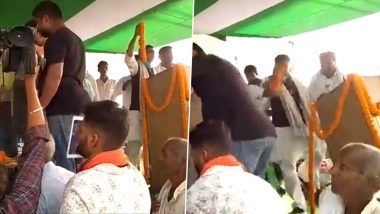 According to reports, after filing his nomination papers from Sonpur assembly seat for the upcoming polls, Chandrika Rai was supposed to address a rally. A huge crowd had gathered for the rally. After Rajiv Pratap Rudy concluded his speech, Rai stood up for addressing the crowd. Before he began speaking, several people climbed the stage to garland the JD(U) leader. Soon after, the crowded stage came down crashing. Bihar Assembly Elections 2020: JD(U) Allotted 122 Seats, BJP to Fight on 121, Says CM Nitish Kumar.

WATCH: When the campaign stage of JDU’s Chandrika Rai collapsed in Chhapra. Shocking visuals of social distancing norms being flouted. Just count the number of people wearing masks there.

According to a news channel, several people were injured in the incident. Rai and Rudy, however, sustained no injury. Rai is the father-in-law of Rashtriya Janata Dal (RJD) leader Tej Pratap Yadav. Yadav married Rai's daughter Aishwarya in 2018. However, the couple is now seeking a divorce. Political campaigning is in full swing despite the ongoing coronavirus pandemic in Bihar.

The elections for 243 Assembly seats will be held in three phases - for 71 seats on October 28, for 94 seats on November 3, and remaining 78 on November 7. The results will be announced on November 10.

(The above story first appeared on LatestLY on Oct 16, 2020 05:27 PM IST. For more news and updates on politics, world, sports, entertainment and lifestyle, log on to our website latestly.com).