A group of Bharatiya Janata Party (BJP) workers were booked for putting a huge poster with "Jai Shri Ram" written on it on Palakkad municipality office in Kerala. 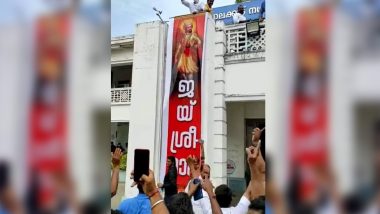 Palakkad, December 18: A group of Bharatiya Janata Party (BJP) workers were booked for putting a huge poster with "Jai Shri Ram" written on it on Palakkad municipality office in Kerala. The incident reportedly took place on December 16 after the BJP won Palakkad municipality for the second consecutive term. Following a complaint of the municipal secretary, police booked for "provoking riot". JP Nadda Thanks Kerala for Improved Mandate to BJP in Local Body Polls.

A group of BJP workers on Thursday climbed on to the top of the Palakkad municipal building and unfurled multiple giant posters across the structure's front face. One of the posters had "Jai Shri Ram" written on it with a picture of Maratha king Shivaji. Prime Minister Narendra Modi and Union Home Minister Amit Shah also featured in another poster. Kerala Local Body Election Results 2020: Congress' Mayor Candidate Loses by 1 Vote to BJP Candidate in Polls.

Based on the comparing of the municipal secretary, a government official, police registered a case against the BJP workers under 153 (Wantonly giving provocation with intent to cause riot) of the Indian Penal Code IPC). The BJP has won 28 of the total 52 seats in the Palakkad municipality. In 2015, it was the single largest party with 24 seats. The results of local body elections in Kerala were declared on December 18.

Palakkad BJP District President, Advocate Krishna Das E questioned how raising "Jai Shri Ram" slogan is a crime. "I am unapologetic. How is chanting 'Jai Shri Ram' hurting religious sentiments? Thousands of workers were celebrating our victory and I don't see anything wrong in what happened. If we don't chant 'Jai Shri Ram' in India, do we then do so in Pakistan? This complaint will not have any legal standing," he was quoted by NDTV as saying.

(The above story first appeared on LatestLY on Dec 18, 2020 01:34 PM IST. For more news and updates on politics, world, sports, entertainment and lifestyle, log on to our website latestly.com).