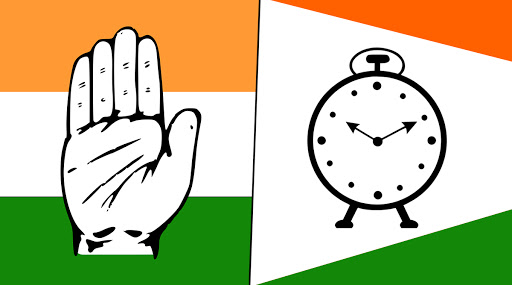 Mumbai, October 7: The Congress and the Nationalist Congress Party (NCP) on Monday released a joint election manifesto for the Maharashtra Assembly polls 2019. In the manifesto, both the parties have promised a blanket loan waiver for farmers and free education till graduation. Among other important announcements, the Congress-NCP allowance promised to reserve 80 percent jobs locals in various industries. Congress 5th List For Maharashtra Assembly Elections 2019 Out; Mohanrao Hambarde Contesting from Nanded South; Check full List Here.

The manifesto says, “We will focus on to make agriculture a prestigious profession. To make this possible, all their debt will be waived off in the first four months. Priority will be given to increase agricultural productivity and proper remuneration to their produce.”

According to Maharashtra NCP Chief, For 32,000 vacancies, the state government has received 32 lakh applications. “To deal with the situation, we will provide unemployment allowance to the jobless youths,” reported Hindustan Times quoting Patil as saying. Who Will Win Maharashtra Assembly Elections 2019? Here's What ABP News Opinion Poll Results Predict.

Both the parties are contesting the Maharashtra Assembly in alliance with each other. The Congress is contesting on 144 seats, and the NCP has fielded its candidates on 122 seats, while remaining 22 seats are left for smaller alliance partners. The ruling Bharatiya Janata Party and the Shiv Sena are also contesting elections together.

The election for 288-member Maharashtra Assembly is taking place on October 21 along with Haryana. The votes will be counted on October 24, and the results are expected on the same day.